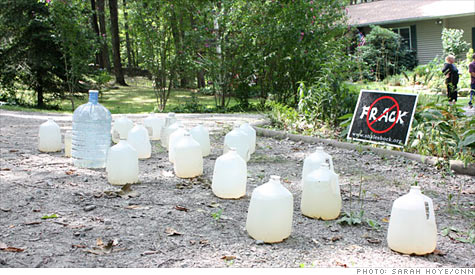 Water jugs from a well in Pennsylvania that the owners say were contaminated with methane by natural gas drilling. By Steve Hargreaves, Senior writerSeptember 11, 2010: 4:53 PM ET

NEW YORK (CNNMoney.com) -- Hundreds of people are expected to pack an upstate New York auditorium Monday as the federal government enters the fray over a controversial technique for natural gas production.

The hearing is the public comment portion of an ongoing Environmental Protection Agency investigation into whether or not hydraulic fracturing, a process that injects thousands of gallons of chemical-laced water and sand into natural gas wells, cracking the shale rock and allowing the gas to flow out, is safe.

Fracturing - or 'fracking' - has helped usher in one of the biggest energy booms in U.S. history. It's also generated fear over ground water contamination and other hazards.

"It's a trap," said Martha Robertson, a resident of Dryden, N.Y., who is traveling to the hearing in Binghamton on Monday. "If it comes to New York it will transform our landscape, our economy, and our way of life. I'm deeply concerned about going in this direction."

The hearing will be the fourth the EPA has conducted across the nation as it attempts figure out if fracking, which is expanding on a rapid scale in shale gas fields across the country, is safe.

Monday's meeting, where opposition to fracking runs the highest, was originally set for last month but was changed at the last minute. Security had to be reassessed because thousands of people were expected to show up.

Now, about 2,000 are expected, said Binghamton Deputy Mayor Andrew Block, who said people only had a couple of weeks to plan for this meeting.

Nonetheless, the city will close off two roads around the auditorium on Monday, keep about a dozen police on hand, and set up designated areas for both pro and anti-drilling advocates to gather.

"People are expecting tension," said Robertson. "This is as tense issue."

A second day of hearings is set for Wednesday.

Natural gas can also be used to power modified vehicles. Although not yet popular for cars, the idea is catching on among operators of large fleets: city busses, delivery trucks adn the like. If adopted more widely, cleaner burning cheaper gas, could put a big dent in the nation's oil imports.

On Thursday, the EPA asked companies to disclose what chemicals they are injecting into the ground. Many people want more, including greater EPA oversight, more enforcement personnel, and greater treatment of the fluids when they are returned to the surface.