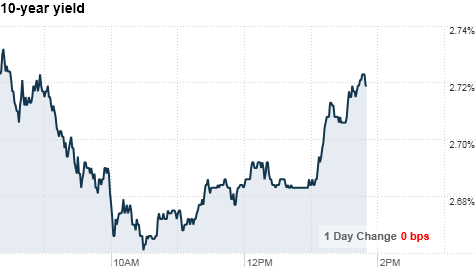 NEW YORK (CNNMoney.com) -- Treasury yields were mixed Wednesday as investors responded to the Bank of Japan's decision to intervene in the currency market, along with mixed reports on U.S. manufacturing activity.

Japan's Ministry of Finance announced that the Bank of Japan would sell yen and buy U.S. dollars in its first currency intervention since 2004. The goal is to curb the meteoric rise of the yen, which has been a major source of concern for Japan's export-driven economy.

The move raised speculation in the Treasury market that the Bank of Japan could reinvest U.S. dollars into short-term U.S. bills, said Kim Rupert, a fixed-income analyst at Action Economics. She estimated that the total value of the intervention was about $12 billion.

While the currency intervention weighed on yields for short-term maturities, the longer end of the curve was supported by mixed economic news.

Meanwhile, mixed reports on the manufacturing sector helped fuel demand for the safety of U.S. debt.

A report on manufacturing activity in the area around New York came in slightly weaker than expected, although analysts said the Empire Index still reflected improvement in the sector.

Separately, government data showed that industrial production rose 0.2% in August, below the 0.3% gain expected by economists. Capacity utilization fell to 74.7%, from a downwardly revised 74.8%.

"The manufacturing recovery has clearly lost some momentum since the spring," said Paul Ashworth, senior economist at Capital Economics. "We don't expect this to develop into an outright collapse, but some of the survey evidence is still worrying."

Villains of the Financial Crisis, where are they now?

Help Desk
Track testing tires to find the best
Find out how TireRack tests and reviews tires and why choosing the right ones for your car is so important. Play
Markets
Data as of 3:14pm ET
Data as of Jan 24
Sponsored by
Sections