Warren: 'Tricks and traps' are over 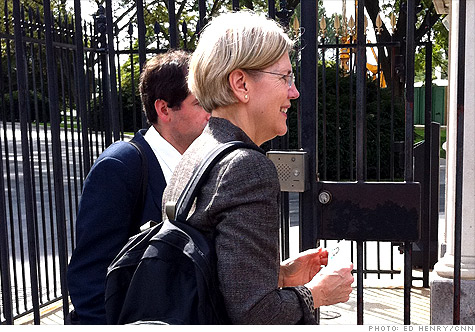 WASHINGTON (CNNMoney.com) -- President Obama will announce Friday that he's appointing Harvard law professor Elizabeth Warren to play a key role in crafting the consumer financial protection bureau that was her idea in the first place.

Warrren, 61, said she "enthusiastically agreed" to serve as a special adviser in the Obama administration, in a blog post appearing on the White House Website.

"He has also asked me to take on the job to get the new CFPB (Consumer Financial Protection Bureau) started right now," said Warren. "The President and I are committed to the same vision on CFPB, and I am confident that I will have the tools I need to get the job done."

Arriving at the White House for the Friday announcement, Warren told CNN's Ed Henry that she's "very confident" she will have real power to get the new consumer protection agency set up with some teeth, based on reassuring conversations she has had with the president.

She told Henry that, unequivocally, she's fired up and ready to "get some things done" immediately.

The job gives the outspoken Warren - who also heads the Congressional Oversight Panel overseeing the $700 billion bank bailout - a unique insider's megaphone within Treasury and the White House, while sidestepping a Senate confirmation battle. Her title will be Assistant to the President and Special Advisor to the Treasury Secretary.

Warren envisions the Consumer Financial Protection Bureau as a regulatory body that will ensure consumers don't "learn about an unfair rule or practice only when it bites them way too late for them to do anything about it," she wrote.

"The new law creates a chance to put a tough cop on the beat and provide real accountability and oversight of the consumer credit market," she wrote on the Website. "The time for hiding tricks and traps in the fine print is over."

In released remarks slated for delivery later Friday, President Obama described what's in store at the new consumer bureau, which was the signature piece of the Wall Street reforms signed into law over the summer.

"Never again will folks be confused or misled by the pages of barely understandable fine print that you find in agreements for credit cards, mortgages, and student loans," Obama said. "The Consumer Financial Protection Bureau will be a watchdog for the American consumer, charged with enforcing the toughest financial protections in history."

The Treasury Department has been laying the groundwork for the new consumer agency to be housed inside the Federal Reserve. Warren will report to the president and Treasury Secretary Timothy Geithner, sources have told CNN.

This announcement does not mean that Warren will run the new consumer bureau once it's up and running. But she remains a candidate for that job as well, sources have told CNN.

Some, including Senate Banking chief Christopher Dodd, D-Conn., noted that Obama's move doesn't solve the question of who will ultimately run the agency.

"There's always been discussion about having Elizabeth involved in some way," Dodd said. "The issue still remains, who are we going to consider."

-- CNN's Ted Barrett and Ed Henry contributed to this report.