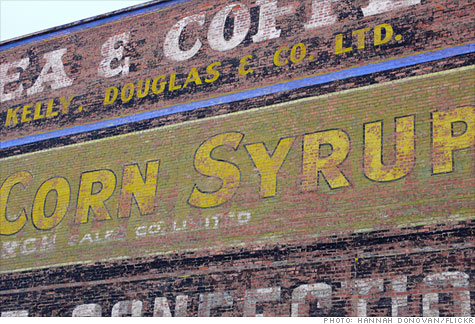 FORTUNE -- Last week, the Corn Refiners Association announced that it petitioned the FDA for permission to change the name of high fructose corn syrup to "corn sugar." Just a few years ago, in the era of "sugar-free Snackwells," and other similarly marketed foods, such an idea would have been unthinkable. But after a few decades of being among the most vilified substances in the supermarket, "sugar" -- meaning sucrose, the old-fashioned white stuff made from cane and beets -- is back.

Big food companies are actually bragging that they're using it again, slapping the words "real sugar" on ads and product labels. Meanwhile, Sugar is no better for you than it was before, which is to say, terrible, whether it comes in the form of cane crystals or corn squeezin's.

Sucrose's comeback comes thanks in large part to the critics of high fructose corn syrup (HFCS) who have spent years attacking the substance not as part of an overall campaign against sugar, but as part of a very focused campaign against HFCS alone. Rather than condemning all sugars, they instead have tended to compare HFCS, unfavorably, to sucrose. The unintended effect? Convincing the public not only that HFCS is poison, but also that sucrose is a not-so-bad alternative. Both notions are false.

Some of those critics made big fun last week of the CRA's request to the Food and Drug Administration for the name change. As they note, it's a transparently craven, desperate marketing maneuver. And yet, the new name, if approved, is actually much more accurate than high fructose corn syrup, which isn't particularly high in fructose. HFCS is sugar made from corn.

You wouldn't know that by reading the screeds of HFCS's most vociferous critics. Some are extreme. Ivan Royster, a college librarian, created a Facebook page titled "THE BAN OF HIGH FRUCTOSE CORN SYRUP IN THE U.S." (gratuitous capitals his) that drew tens of thousands of fans soon after he created it. Robyn O'Brien, a Huffington Post writer, wants soft-drink makers to drop HFCS and return to sucrose to "restore the integrity of the food supply."

Other critics, such as Grist's Tom Laskawy, are far more reasonable. But they might have done more harm for that very reason. Laskawy has repeatedly made the HFCS/sucrose comparison, portraying HFCS as being the far more harmful of the two. "Yes, we consume too many sweeteners of all kinds," he dismissively wrote last week before going on to condemn HFCS and ridicule the CRA's choice of "corn sugar." Sucrose, he argued by implication, isn't "industrially extracted" (actually, it kind of is), therefore it's better for you.

Of course Laskawy et al don't say this explicitly, but what else should people conclude when they see HFCS being relentlessly vilified and compared unfavorably to sucrose? To casual observers, sucrose now comes off as "natural" while HFCS seems artificial, "chemical" -- even poisonous.

The new foodie love of "sugar" on the label

So it's no surprise that the CRA chose "corn sugar" over, say, "corn sweetener." Big Corn is just playing along with the rest of the food industry. With HFCS's reputation plummeting, PepsiCo (PEP, Fortune 500) now offers "Throwback" versions of Pepsi and Mountain Dew, made with sucrose. Dr Pepper recently got on board with an anniversary edition of the drink that has the words "Made With Real Sugar" emblazoned across the label. Food bloggers pine for Coca-Cola (KO, Fortune 500) made for Passover, when Jewish law dictates that sugar rather than corn syrup be used. Kraft Foods markets Wheat Thins and other products as no longer containing HFCS. And ConAgra (CAG, Fortune 500) does the same with Hunt's ketchup.

The science behind HFCS has been argued to death and there's no need for another retread here. Suffice to say that most research indicates that, healthwise, there's not much difference between HFCS and sucrose. Both substances contain about half glucose and half fructose (HFCS contains a bit more fructose). A few studies indicate that there might be chemical differences that make HFCS more likely to cause weight gain, but so far, those studies haven't proven a wide difference between it and sucrose. The bottom line is that sugar from any sources can make a person overweight and diabetic.

If the critics of HFCS are more interested in promoting public health than they are in attacking big business, they'll change their tactics and start attacking all kinds of sugar. That's what nutritionist Marion Nestle recommends.

No great pal of either the corn refiners or their processed-food-producing customers, the author of "What to Eat" has been trying for years to get people to understand what is wrong, and what isn't, with HFCS. Her approach makes it possible for her to credibly "give the CRA credit for calling a sugar a sugar" while also making clear that she is "not fond of the idea that Americans use 60 pounds of corn sweeteners per capita per year and another 60 pounds of table sugar."

Sugar and HFCS are our two biggest sources of empty calories. Our national dietary sins are about evenly split between them, so health advocates might as well call them both what they are, and attack them with equal vigor.

The word "sugar"-rightly-fell into disfavor about 30 years ago. Once its harmful effects became well known, food producers started avoiding the word. In the early 80's, Kellogg (K, Fortune 500) changed the name of Sugar Smacks to Honey Smacks. Post's Sugar Crisp became Golden Crisp. At no point was the sugar content of these cereals reduced, and in 2008 Consumer Reports noted that a serving of either contained as much sugar as a glazed doughnut.

In other words, the food industry will use whatever language is fashionable at the time, to keep giving consumers what they crave. When "sugar" didn't work, food producers deleted the word -- but not the ingredient. Now that sugar has become slightly fetishized, food marketers are dusting off their old playbooks.

Critics of Big Food would do well to take heed of this message. Rather than exaggerating the differences between one terrible product and another, they're better off finding a way to convince consumers that too much sweet stuff -- no matter what plant it comes from - is what ails them. Only the success of that type of message can change what Big Food delivers to the marketplace.