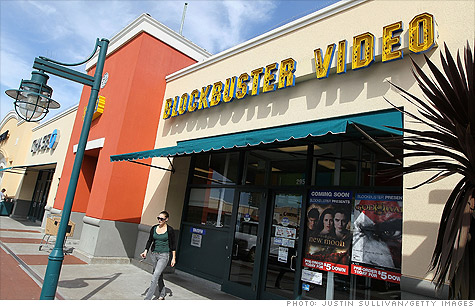 A Blockbuster store in San Francisco. By Annalyn Censky, staff reporterSeptember 23, 2010: 10:17 AM ET

The movie rental store's U.S. businesses filed for Chapter 11 protection in the U.S. Bankruptcy Court for the Southern District of New York. As part of its recapitalization plan, Blockbuster (BBI, Fortune 500) said it would attempt to reduce its debt load to $100 million or less.

In a release Thursday, the company said it has secured $125 million in financing from senior bondholders to keep its remaining U.S. businesses open during the bankruptcy proceedings.

Its stores, DVD vending kiosks, by-mail and digital businesses will continue serving customers. But the company will have to implement major cost-cutting measures to repay its investors, said Michael Pachter, an analyst with Wedbush Morgan Securities.

"Blockbuster is under the gun now to generate as much cash as possible," he said. "When they were run by shareholders, the company was making investments and trying to grow. Now that they've been seized by creditors... Blockbuster will have to manage the business as lean as possible."

Blockbuster has struggled for survival ever since media conglomerate Viacom (VIA) spun off the company in 2004. As a part of the deal, the company had to pay Viacom shareholders a $5 per-share dividend, and the movie rental giant racked up about $1 billion of debt in the process.

The company also suffered losses from unprofitable stores and increased competition from both Netflix (NFLX) and Coinstar's (CSTR) Redbox.

Blockbuster's advantage over its competitors continues to be its selection of new releases and large volume of titles in every store, Pachter said.

But customers who look for lower prices have turned to Redbox, and those who prefer the ultimate convenience of never leaving home often prefer Netflix's by-mail service, he said.

Blockbuster warned of a possible bankruptcy as early as March of this year.

To help solve its debt problems, Blockbuster began shutting down a third of its 4,500 U.S. stores last year, and now operates about 3,000 locations in the United States.

Redbox: We will stream movies