The bulls are back: Stocks surge 2% 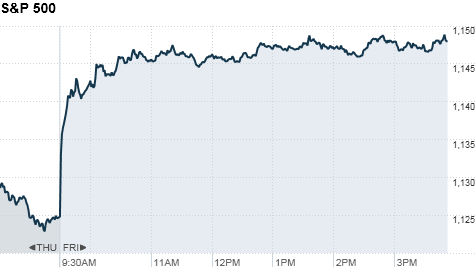 NEW YORK (CNNMoney.com) -- U.S. stocks rallied right out of the gate and didn't look back Friday afternoon as investors grabbed onto a slightly stronger report on durable goods orders, and as gold touched a record high above $1,300 an ounce.

All three major indexes closed at their highest levels in four months and finished with gains for the fourth straight week, their longest winning streaks since April.

The Dow Jones industrial average (INDU) surged 198 points, or 1.9%, with all 30 components of the blue-chip index higher. The blue-chip index closed the week up 2.4%, and is on track to rally 8.4% for the month. That would make this month the Dow's best September since 1939.

"The better-than-expected report on orders for durable goods, particularly the nice rebound in goods excluding transportation, further confirms that a double-dip recession is not likely any time in the immediate future," said Ryan Detrick, senior technical strategist at Schaeffer's Investment Research.

Stocks climbed early in the week as the S&P 500 index crossed key technical levels, but fell into a slump in recent trading sessions.

"All this week, we've seen maybe some nervous markets, concerned about the stuttering economic recovery," said David Jones, chief market strategist at IG Markets. "But overall, I think they're still bullish. Maybe the weakness over the last couple of days was a bit overdone."

The durable goods report was driving the market Friday because investors are seizing upon "any positive sentiment for the market right now," said Hamed Khorsand, analyst at BWF Financial.

Wall Street had a rough session Thursday, ending with a late-stage slide. Investors have been fleeing risky stocks in favor of safe-haven investments like gold, fueling the precious metal's recent record run.

Economy: The government said durable goods orders, a measure of manufacturing, fell 1.3% in August after slipping 0.7% in July. That was a hair better than the 1.4% decline economists had forecast. Durable goods orders are orders on products meant to last at least three years, such as cars and computers.

New home sales remained at the second-lowest level on record in August at an annual rate of 288,000, the government reported. Economists had expected sales to bump higher. The data come a day after existing home sales came in slightly above expectations.

Companies: KB Home reported a third-quarter loss of 2 cents per share. That was much better than the 15-cent loss forecast by analysts. Revenue rose more than 9% year-over-year to $501 million, marking the first year-over-year increase in four years. The stock jumped 3.4%.

After the closing bell Thursday, Nike reported an 8% rise in quarterly revenue to more than $5 billion as new orders jumped 10%. In China, orders surged 25%, and orders in emerging markets rose 21%. The stock rose 2.5%.

HSBC (HBC) chief Michael Geoghegan is poised to leave the bank as part of a management shake-up, according to published reports. The company's stock climbed 1.7%.

Currencies and commodities: The dollar fell against other currencies, including the British pound, the Japanese yen and the euro.

Gold futures for December delivery reached a record trading high Friday morning, fueled by recovery jitters and currency market volatility. Prices reached an intraday trading high of $1,301.60 an ounce before backing off. Gold prices settled up $1.80 at $1,298.10 an ounce.

Emerging markets can't save the world