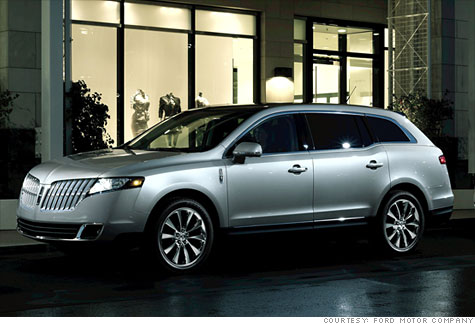 FORTUNE -- If you're wondering what might replace all those aging black Lincoln Town Cars used as New York City limousines when they finally reach a state beyond repair -- wonder no more. Ford Motor Co (F, Fortune 500). is offering a special version of its Lincoln MKT crossover, announed just ahead of the Paris Auto Show's public opening on October 2nd.

Black MKTs (and make no mistake -- livery drivers will insist on black) are already showing up in Gotham, being put through their paces by chauffeurs trying to figure out whether their clients judge them sufficiently prestigious and sufficiently sturdy to withstand the wear and tear of livery operation in the big city.

"We're evaluating a few of them in our fleet, so far so good,'' said Mark Heminway, vice president of Executive Transportation Group, which is based in Brooklyn and specializes in corporate clients. "Long term we still have to find out what will be the price point and the ultimate acceptance by customers. Don't forget: the Town Car is an icon.''

Once upon a time Lincoln competed vigorously with Cadillac, though GM's luxury brand has surpassed it in the past decade. One of Lincoln's few redoubts has been its limousine business in New York. The passing of the Town Cars, which takes place late next year as Ford's St. Thomas, Ontario plant stops building them, speaks to the inexorable decline of heavy, relatively fuel-inefficient vehicles struggling against tougher federal and local environmental rules. Then, there's the question of style.

For a whole generation of bankers, lawyers, executives, shortstops and mezzo sopranos, chauffeured Lincoln "black cars'' broadcast a message of status to those on the far side of the plush cord. A walk through the financial district or Midtown around 5pm reveals long rows of Town Cars parked outside the city's most prestigious addresses. No gala or cultural event seems complete without a great herd of them idling on some side street.

The Greatest Generation adored the Town Car, too. Well used copies of them are plentiful across Florida's many retirement communities. But recent years have witnessed a redefinition of status, as some well-heeled limousine passengers have migrated to green, choosing to be driven in an environmentally-correct Toyota Prius or other hybrid. Others have decided the firmer but smoother ride of a BMW or Mercedes outweighs the Town Car's pillow-like backseat, which can transmit into a nasty jolt when encountering a New York City pothole.

"We're ahead of the curve with our hybrids,'' Heminway said. "A lot of our customers demand them.'' But plenty still demand the "sumptuous'' back seats. He estimates that his and other limousine companies operate about 8,000 Lincoln Town Cars in New York, most of which are owned by their drivers.

The 2011 Town Car is the last model of the big-wheel-drive vehicle that Ford will build, at least for the time being. It shares its basic architecture with the Ford Crown Victoria, which the automaker is likewise phasing out to the disappointment of police departments. Chauffeurs typically shun front-wheel-drive, which is standard for MKT, so Ford will be pushing its all-wheel-drive version, which can be lengthened to stretch-limousine proportions.

Ford plans to offer Wi-Fi in its MKT livery model, a feature that could attract legions of gadget-addicted passengers who must email while commuting, play Grand Theft Auto or download the latest from iTunes during the ride to LaGuardia Airport.

Ford hasn't yet announced a price for the livery version of its MKT, though the regular model in its all-wheel-drive version starts at about $45,000. If a chauffeur wishes to buy one last Town Car, Ford's website says it costs about $47,000.