Harvard vs. Stanford: Which builds a better entrepreneur? 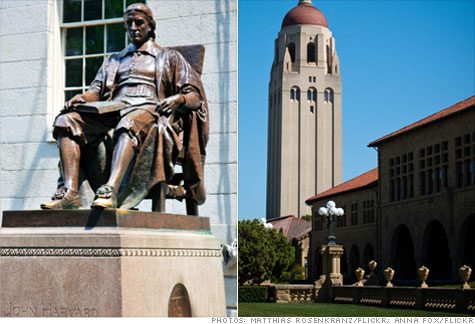 (poetsandquants.com) -- When you think of the world's best business schools, you inevitably think of two great rivals: Harvard and Stanford.

For decades, Harvard has long been known as the West Point of Capitalism, the breeding ground of the corporate elite, while Stanford has smartly used its Palo Alto location to serve as a highly productive incubator for Silicon Valley.

Harvard is hoping to change that simplified view.

"There is a great myth about some other institutions and the degree to which they represent entrepreneurship," says William A. Sahlman, who teaches entrepreneurial finance at Harvard. "It's total fiction. We have a higher proportion of our faculty and a higher number teaching entrepreneurship than other schools have faculty."

The Harvard offensive has kicked into full gear today with the publication of The Intelligent Entrepreneur, a book by author Bill Murphy Jr. on three successful Harvard MBAs from the class of 1998 who turned down safe jobs at big companies to launch their own enterprises.

Written with the cooperation of the school, The Intelligent Entrepreneur also touts Harvard's deep commitment to the field and quotes many of the school's professors, who, according to Murphy, "see the entire discipline of entrepreneurship as necessary, life fulfilling, and at times almost spiritual. They're not just teaching business strategies and processes; they're inspiring students to embrace a way of life."

All of this has come at a time when the job market for MBAs is weak and more students have become interested in starting their own ventures.

The vast majority of MBA students, of course, still rush headlong into high-paying jobs in consulting and finance to help pay down their tuition debt. But professors at both schools say that more than half the graduates of Harvard and Stanford end up running their own companies within 10 years.

Ask Stanford Dean Garth Saloner about his school's strength in the field and he holds nothing back. "Our entrepreneurship curriculum is stunning," he says. "Our courses are taught with a faculty member and a practitioner. And our students are in Silicon Valley and at a university where they are within walking distance of every other school -- in medicine, engineering, design -- so they can work with other students on ventures to change things in many fields."

At Stanford, one of every four electives is in the discipline and 95% of the students take at least one course in entrepreneurship. Just down the street from Sand Hill Road, known for its concentration of venture capitalists, Stanford draws on many VCs and startup entrepreneurs as lecturers in its classrooms. Intel (INTC, Fortune 500) founder Andy Grove and ex-Cisco (CSCO, Fortune 500) CEO John Morgridge are among dozens of well-known entrepreneurs who have taught at Stanford for years.

Harvard's history of entrepreneurship is quite different. For many years, the school had so thoroughly defined itself as an academy for the corporate elite that it dismissed entrepreneurship as a subject unworthy of serious study. As an HBS account of its own history put it, entrepreneurship at Harvard was seen as a "personality defect," and the typical entrepreneur was considered "a chronic malcontent."

All that changed in the early 1980s when Howard Stevenson, a veteran HBS professor, returned to campus to develop a full-fledged curriculum in the field. Even so, it wasn't until 1997 that Harvard finally started its first business plan competition, only after prodding from students and over the objections of some faculty. Earlier this year, 110 teams participated in the competition.

"Last year we had 35 companies start right out of HBS," says Sahlman. "We had more business plans then at any time in the history of our competition. One reason was that the job market is not so great. The second reason is that the cost of doing certain kinds of businesses has gotten smaller. So if you're starting a web-based startup, it's going to cost $250,000 to $500,000, it's not going to cost $10 million."

Unlike Harvard, which has a separate department of entrepreneurship, Stanford has no dedicated faculty. Instead, the school teaches the discipline by pulling from traditional disciplines in marketing, finance, and organizational behavior.

Stanford doesn't have a business plan contest because the school views its mission as more "educational" and not as a launch pad for startups, says Linda Wells, executive director of Stanford's Center for Entrepreneurial Studies.

"Our geography is a huge part of the benefit," says Wells. "We live in an incubator. Everything you would want to start a company is here, except for funding, and we have venture capitalists as lecturers and relationships with many angel investors."

If Harvard lacks location, it makes up for it by throwing formidable resources at the field. The school has its own building devoted to the subject, the $25 million Arthur Rock Center, named after the HBS alum who invested in both Apple (AAPL, Fortune 500) and Intel.

Harvard boasts 35 faculty members who teach the discipline, the second largest faculty group at the school. All first-year MBAs at Harvard must take a course in entrepreneurship and can choose from almost two dozen second-year electives on the topic -- pretty much the same number of courses that Stanford offers. Harvard says its alumni make up nearly 25% of the entire venture capital industry.

As a percentage, more Stanford grads (about 15%) are likely to either start companies or immediately work for startups than Harvard grads. Indeed, nearly 10% of Stanford's graduating class launch companies right out of school, versus about 4% to 6% at Harvard -- numbers significantly lower than during the 1999 dot-com-era boom.

"In 1999, everybody and their brother was starting a company," says Wells.

If anything, Harvard simply wants to break the myth that it is merely a breeding ground for corporate chieftains, investment bankers and management consultants. As Murphy concludes in his book, Harvard has gone through "an impressive process of reinvention."

What Harvard MBAs plan to do with their 'Wild & Precious' lives

Entrepreneurship at the West Point of capitalism