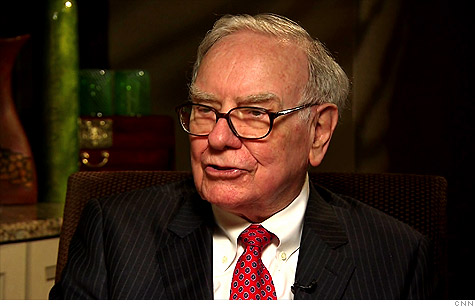 FORTUNE -- The first thing I notice on my most recent visit with Warren E. Buffett, who recently turned 80, is how incredible he looks. He would look terrific for 50; for 80, he looks like Charles Atlas. He's modest about it, as he is about everything. "It all works great," he says. "The eyes, the hearing -- everything works great ... which it will until it all falls apart."

The second thing you notice is that he is so smart it curls your hair. 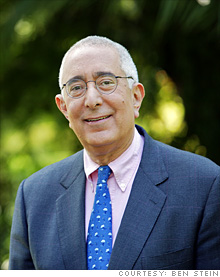 My first question, as I sit there on the couch in his office, is: "What about gold? Is this a classic bubble or what?"

"Look," he says, with his usual confident laugh. "You could take all the gold that's ever been mined, and it would fill a cube 67 feet in each direction. For what that's worth at current gold prices, you could buy all -- not some -- all of the farmland in the United States. Plus, you could buy 10 Exxon Mobils, plus have $1 trillion of walking-around money. Or you could have a big cube of metal. Which would you take? Which is going to produce more value?"

Okay, so gold is not a screaming buy to Buffett. What should a typical upper-middle-class person in the U.S. buy to prepare for retirement?

"That's good enough. Maybe a selection of high-dividend-paying stocks that are likely to raise their dividends. Maybe the top 100 dividend payers of the S&P 500."

Then, after a second's thought, he adds, "Well, maybe not that, but equities."

On the $64,000 question -- whether the recovery was real -- Buffett has no doubt. "Yes," he says, "it's a recovery. It's a slow recovery, but it's a recovery. We're calling back some people at Burlington Northern. We are still letting a few go in other businesses, but we see a pickup in business of heavy users of American Express (AXP, Fortune 500), in freight car loadings at BNSF -- across our businesses, we see slow recovery."

"When would you start hiring a lot more people?" I ask him.

"When demand picks up," he says. "We don't hire because we get a tax break or because someone in the government tells us to. We hire when there's more demand for what we are making or moving or selling. It's that simple."

"Where will the demand come from if a business as big as yours is being so cautious?" I ask.

"It's already coming," he says. "It's already happening, and it will pick up. Look," he adds, "we needed a really big stimulus in the fall of 2008 -- a really, really big stimulus. We didn't get it. It was a miracle that Bank of America (BAC, Fortune 500) bought Merrill for $29 when it was probably worth 29 cents if left on its own for a few days. If that hadn't happened, everything would have collapsed. The whole commercial-paper market would have stopped. Every domino would have fallen. Berkshire (BRKA, Fortune 500) would have been the last, but it would have fallen too. Ken Lewis saved the whole system for a while, until TARP could rescue it. But now we're just going to get a very slow recovery because people are still scared. But we are seeing recovery, definitely."

"How about in housing?"

"That recovery is still a long way off. That market got way out of equilibrium, and it's going to take a long while for it to get fixed."

Buffett goes into his life and childhood, but I don't see how we can make any money out of that, so I will leave that part out.

"Why would we want to do that" I ask, "if we have a fiscal policy that is explicitly about running large deficits?"

The three of us -- Buffett, my colleague Phil deMuth,and I -- talked for a long time about the size of the deficits relative to "normal peacetime" and World War II, when they were far higher than they are even now. Then Buffett sums up his feelings about it, saying his wish to raise taxes on the very rich is really about social justice more than about fiscal policy.

"I would give anyone an exemption from the higher rates if he had a son or grandson in Afghanistan," he said. "I meet a lot of people at these conferences of rich people, of billionaires," he said. "None of them have anyone in their family in combat."

We talk awhile longer, and then Phil and Warren and I go out for a memorable Italian meal at Piccolo Pete's, which Warren considers the best restaurant in America. I look at him as he chews his meatballs. (He has perfect table manners.)

"This guy is so smart -- it's like he's a machine, but a very friendly, polite, affable machine," I think.

I keep thinking of what I would do if I had even the tiniest fraction of his money. But I never will, so I'll skip that too.

Buffett drives us back to the hotel in his lovely Cadillac. "I bought it because a couple of years ago I saw Congress giving Rick Wagoner (the former CEO of GM) such a going-over that I thought I should help him out by buying a Cadillac."

"Cadillac," I think, remembering an old Bob Dylan song. "Good car to drive, after a war."

Ben Stein is an economist, actor, lawyer, writer and quiz show host from 1988 to 1996 was a professor of law and economics at Pepperdine University School of Law.

One more reason for Buffett to hate private equity

Buffett says cut taxes for all but the rich