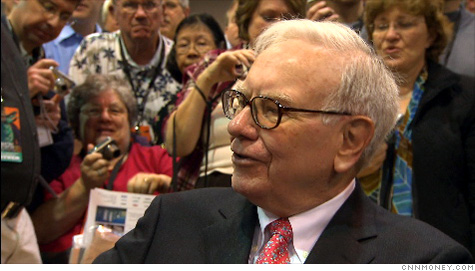 Behind that simple fact is a big story: Combs, a mere 39, will with this move become the leading contender to eventually succeed Warren Buffett as manager of Berkshire's billions in investments.

The word "investment" is key to that last sentence. As chairman of Berkshire, Buffett has two jobs: He runs the business as CEO, and he manages Berkshire's huge investments in securities. It is the investment job for which Combs is the leading contender.

Buffett's hiring of Combs at least partially satisfies a commitment Buffett made to Berkshire's shareholders more than three years ago in his 2007 annual letter, published in March that year. Buffett said were he to die "tonight," the company would have three outstanding candidates for the CEO half of his job. On the investment side, however he conceded that good candidates were not lined up in the wings.

Buffett therefore announced that he, with the help of vice chairman Charlie Munger and Lou Simpson (who runs the equity investments of Berkshire subsidiary GEICO), would hire one or more men or women to manage part of Berkshire's money.

The years passed, with no one hired. At each Berkshire (BRKA, Fortune 500) annual meeting, held in the spring, there would be a shareholder question about progress on this important front. Buffett would answer that the search continued.

Now, with Combs recruited, at least part of the hunt is ended. On that subject, Buffett, who just turned 80, will surely have something expansive to say in his next shareholder letter. Whether he will add that an additional investment manager or two may be hired is not known.

Talking today to Fortune about Combs, Buffett said he had met him through Charlie Munger, who had thought that Combs would fit in well at Berkshire. Buffett agrees. In a press release Berkshire issued today, Buffett said, "For three years Charlie Munger and I have been looking for someone of Todd's caliber to handle a significant portion of Berkshire's investment portfolio. We are delighted that Todd is joining us."

Buffett described Combs as an "all-American type" who is not the least bit interested in publicity, an attitude unlikely to shield him from it. Now a resident of Darien, Conn., Combs is by birth a Floridian who graduated in 1993 from Florida State University with majors in finance and multinational business operations.

Once out of school he worked for Florida's comptroller and later moved to Progressive Insurance, where he was involved in the all-important activity of setting automobile insurance rates. Progressive is an arch-competitor of Berkshire's GEICO.

Combs' direct route to Berkshire began in 2005 when he began to manage Castle Point, a new long/short hedge fund set up to take positions in financial services companies. Castle Point was seeded with capital by Trident III, one of four Trident funds established over the years by private equity firm Stone Point Capital. Castle Point raised $500 million over two years and began full-scale investing in late 2007.

A more traumatic moment to start any kind of fund, much less one focused on financial services, can hardly be imagined. The stock market had just months before hit a peak and begun to sink into the chaos of 2008. Had Castle Point been only a "long" fund, it would have met immediate disaster.

But the fund's short positions apparently saved it. Buffett describes Combs' record through the financial crisis as "pretty good." Combs' hiring, in fact, clearly indicates that Combs has had a performance with which Buffett is satisfied.

A look at Combs' "longs"

Some insight into Combs' investment thinking can be gained from a look at certain SEC filings made by Castle Point. Institutional investors, including hedge funds, are required every quarter to report their long holdings (though not their short positions) in what is called a 13F filing. A study that Fortune made of Castle Point's13Fs from the first that it filed, for Dec. 31, 2007, through its most recent, for June 30, 2010, shows Combs to have been an active trader with good instincts at one important juncture.

All told, he had long positions in more than 80 different stocks in that 30-month period. A buy-and-hold man he was not: Among his stocks, only one stayed in the portfolio for the entire period. That was United America Indemnity, a Nasdaq insurance and reinsurance company registered in the Cayman Islands until recently and now renamed Global Indemnity (GBLI) and registered in Ireland. From the end of 2007 until the end of June this year, this company's stock fell by 58%.

Given the corporate casualties of the past few years, the most conspicuous fact is that Combs ducked all of the most famous disasters. That is, his fund was not long at any time on AIG (AIG, Fortune 500), Lehman, Bear Stearns, Citigroup (C, Fortune 500), Washington Mutual, Countrywide, Fannie Mae (FNM, Fortune 500), or Freddie Mac (FRE, Fortune 500).

Combs' avoidance of these train wrecks fits Buffett's belief, which he stated in his 2007 shareholder letter, that any person hired to manage Berkshire's investment must be "genetically programmed to recognize and avoid risk, including those never before encountered." (The emphasis is Buffett's.)

Combs' holding of Berkshire Hathaway itself deserves special notice. Most Berkshire Hathaway shareholders do not trade the stock. Castle Point did, holding it briefly at two different times -- when the fund first started up in 2007 and again in the last two quarters of 2009.

Berkshire was in fact part of a buildup in long positions that Combs undertook in the last three quarters of 2009 -- good timing considering that the market turned out to have bottomed on March 9.

Combs will not be moving to Omaha to do his Berkshire Hathaway work, but will instead operate out of Connecticut.

As he joins Berkshire, another of its money managers -- Lou Simpson, who is 74 -- will be retiring after a long and distinguished career at the company.

Disclosure: The author is a longtime friend of Warren Buffett and a shareholder of Berkshire Hathaway.