Microsoft is a dying consumer brand 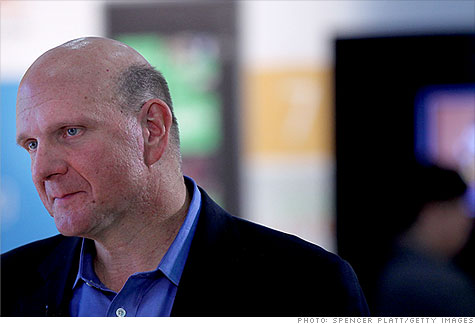 Steve Ballmer, and the company he leads, are struggling with "the vision thing." By David Goldman, staff writerOctober 28, 2010: 7:28 PM ET

NEW YORK (CNNMoney.com) -- Consumers have turned their backs on Microsoft. A company that once symbolized the future is now living in the past.

Microsoft has been late to the game in crucial modern technologies like mobile, search, media, gaming and tablets. It has even fallen behind in Web browsing, a market it once ruled with an iron fist.

"Our early and clear vision notwithstanding, [competitors'] execution has surpassed our own in mobile experiences, in the seamless fusion of hardware & software & services, and in social networking & myriad new forms of internet-centric social interaction," he said.

It's not like Microsoft didn't foresee the changes ahead. With a staff of almost 90,000, the company has many of the tech world's smartest minds on its payroll, and has incubated projects in a wide range of fields that later took off. Experiments like Courier (tablets), HailStorm/Passport (digital identity), and Windows Media Center (content in the cloud) show the company was ahead of the game in many areas -- but then it either failed to bring those products to market, or didn't execute.

"In this age, the race really is to the swift. You cannot afford to be an hour late or a dollar short," says Laura DiDio, principal analyst at ITIC. "Now the biggest question is: Can they make it in the 21st century and compete with Google and Apple?"

Some influential analysts think not. Several have downgraded Microsoft's (MSFT, Fortune 500) stock in recent weeks, as PC sales continue to slow and Microsoft struggles with its tablet strategy. The company's stock is down more than 17% this year.

A rundown of Microsoft's major consumer projects finds trouble in almost all of them.

Internet Explorer's popularity has been waning for years, and one recent study showed that for the first time in more than a decade, more people are using alternative browsers. The browser is becoming the single most critical piece of software on a device -- potentially eclipsing the operating system -- but all of the major innovations of the past few years, like tabbed browsing and add-on extensions, came from outside Microsoft.

Windows Phone 7 has promise, but Microsoft dug itself an enormous hole with the subpar Windows Mobile platform. With its market share currently sitting below 5%, developers are taking a "wait and see" approach.

Bing is growing, but substantially all of that growth has come at the expense of its business partner, Yahoo -- not its archrival Google.

Microsoft's attempts to build a social network through Windows Live have failed to gain traction. It has no real answer to Facebook.

Six months after Apple's (AAPL, Fortune 500) release of the iPad, Microsoft still has virtually no presence in the tablet market. And its strategy for taking on Apple -- Windows 7 on a tablet, rather than a tablet-specific operating system -- is leaving potential partners cold. Lenovo's technology director recently told PC Mag that his company won't be building around the platform: "The challenge with Windows 7 is that it's based on the same paradigm as 1985 -- it's really an interface that's optimized for a mouse and keyboard."

With Xbox, Microsoft succeeded at innovating: It created a competitive video game brand for hardcore gamers. But even Xbox was outdueled by Nintendo with the Wii, which outsold Xbox by appealing to casual gamers.

Then there's the epicenter of the Microsoft universe: Windows. Microsoft likes to point out that its operating system is its biggest consumer brand and Windows 7 has been selling rapidly. Its new version has sold 240 million licenses in a year, making it the fastest-selling OS in Microsoft's history.

But Windows' momentum isn't from consumers. In fact, consumers are a worry for the Windows division, because they have dramatically slowed their purchases of PCs in recent months.

Rather, the fast sales are coming from businesses, which significantly delayed their purchases of new Windows licenses because Windows Vista was bug-ridden mess. Then the recession hit. A years-overdue corporate PC refresh cycle is now happening all at once.

Microsoft has a lot of questions to answer, and it will have an opportunity to do so at its Professional Developers Conference in Seattle, which kicks off Thursday.

But PDC, which used to be one of Microsoft's most important and widely attended conferences, is going to be relatively small this year, with only a few thousand people making the trip, analysts say. PDC's hottest news this year is about cloud computing -- vital to enterprises, but not exactly sexy stuff.

So is this Microsoft's Waterloo? Will it become the next IBM (IBM, Fortune 500) -- crucially important to businesses but an afterthought for consumers?

"Microsoft is at a transition point, and there is a risk of that happening," says Al Hilwa, analyst at IDC. "But Microsoft cares much more about consumers than IBM ever did. It's in its DNA, and it understands that it is necessary to stay relevant. I don't see Microsoft ever abandoning consumers."

As Apple has proven, success in consumer products can fuel explosive growth. Apple surpassed Microsoft's market value earlier this year, and is on pace to eclipse the company in sales for 2010.

And if Microsoft cedes consumer ground, it risks its enterprise stronghold. Businesses are becoming more willing to allow employees to use their personal devices for work purposes, and a growing number of those gizmos are Macs, iPads, iPhones and Android smartphones.

So it's up to Microsoft to turn that around by being a leader, rather than a follower, in the consumer market.

Company executives say they're pleased with their consumer lineup.

"It's hard to overlook the strength of what we're delivering," said Microsoft spokesman Craig Beilinson. "Windows 7 is the fastest-selling operating system ever, Xbox Kinect has sold out from Amazon and Best Buy more than week before availability, and the reviews of our new Windows phones have been incredibly positive. We think our new product lineup speaks for itself, and tells a story of a Microsoft that's taking risks in the creativity and design of our products."

Windows Phone 7 is a good start. Internet Explorer 9 has some exciting new features that other browsers lack. And Xbox's controllerless Kinect -- the first of its kind -- is looking like it will be a holiday season hit.

Microsoft just has to hope it's not too late.

What's next for the post-Ozzie Microsoft? No one knows.