Airlines haven't been this profitable since 1978 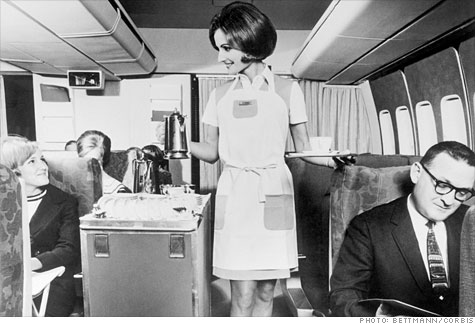 FORTUNE -- At least all those extra airline fees are doing some good -- for the CEOs that are charging them, that is. Over the last week, airlines have announced their quarterly earnings statements, and they're all written in black. Delta (DAL, Fortune 500): $363 million in profit. United (UAUA, Fortune 500): $387 million. Continental (CAL, Fortune 500): $354 million. JetBlue (JBLU) had its best third-quarter ever. Southwest's (LUV, Fortune 500) revenue rose nearly 20 percent.

For an industry that's supposed to be suppressed in times of economic downturn, that's incredibly good. Good for the corporations and shareholders, that is. Average consumers, meanwhile, should be concerned. Because the profits aren't stemming from more people are buying plane tickets -- rather, it's that plane tickets cost more money to buy.

Some historical context: This is the airline industry's best quarter since 1978. Back then, Pan Am and TWA still ruled the skies, JetBlue and AirTran didn't exist, and Capt. Sully was flying an F-4 Phantom II in the Air Force. It was a different era of commercial flight.

And a profitable one, according to data from Vaughn Cordle, the chief analyst at Airline Forecasts in Washington, DC. Cordle's data, which includes private and public companies for the last 30 years, claims that the industry's quarterly net margins -- profit after legal, regulatory, etc. fees are taken into account -- is the highest in 32 years. Those net margins: 7.7 percent. This quarter, in other words, is a once-in-a-generation success.

(One caveat: His 2010 data includes only public companies for now, since those are the only ones that have reported. But they also the companies that bring in the large majority of the industry's revenue.)

So how did the airlines actually manufacture that success? By raising prices, adding fees, and cutting seats. Let's review how recessions torpedo airline business models, and what the carriers do to calibrate to the new normal:

In 2009, before the mergers, airlines reduced their capacity by 5.9 percent from the previous year, according to Cordle's data. It's expected the industry's overall capacity will now be in flux, perhaps with some new seats added as airlines fill in the gaps left behind by the mergers.

After capacity and competition are cut, it's time to nickel-and-dime. Stand-by charges, cancellation penalties, and, of course, baggage fees are all in play for airlines now. (For most of us, that may be for the best, since it keeps the actual ticket price slightly lower for those who only bring a carry-on.)

This is how the airlines start making money again. By cutting capacity and raising fees, they shed themselves of unprofitable customers and extracted a bit more cash out of those who could still afford to fly.

But are things really as bright and cheery as they appear at 30,000 feet? The third quarter is always the best quarter of the year, and even though this was the best in 32 years, there are hitches on the horizon.

Cordle estimates that there are $20 billion of costs that are going to land on the airlines in the next four years. This is just an estimate -- there may not be $4 billion in labor costs, new security regulations may not end up costing $2.7 billion, a new FAA reauthorization bill may not add $2 billion in passenger facility charges, etc. But it's likely that the cost of running an airline is about to go up, very soon.

And when fixed costs go up, so do ticket prices. Which means that the ones who should be most worried about these new quarterly profits are people like us. The only profits we take away from a trip to see family and friends are emotional. The only justification for a business trip, in the age of Face Time, Skype and Google Video Chat, is the intangible of being in the same room.

So if ticket prices and fees get high enough, travelers of all stripes are going to have to start asking ourselves the same question the airlines have: At what point do the costs start outweighing the benefits? For now though, pop the pre-flight Champagne.

Earnings: So far, so very good

Where entrepreneurs need nerves of steel
Subscribe to Fortune