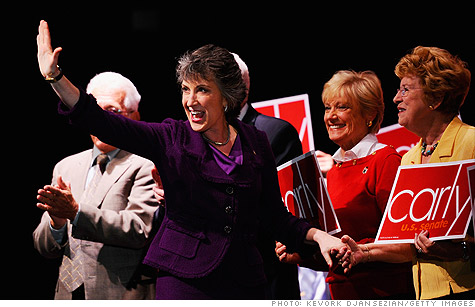 NEW YORK (CNNMoney.com) -- If former Hewlett Packard CEO Carly Fiorina's bid to become the next senator from California succeeds, she will owe a giant "thank you" to the U.S. Chamber of Commerce.

The Chamber has pumped $4.9 million into the California Senate race to help Fiorina, a Republican, defeat Democratic Sen. Barbara Boxer, according to the Sunlight Foundation, a nonprofit that advocates for transparency in government.

The Chamber, a business federation located just steps from the White House, is categorized as a 501(c)(6) trade association. Under this year's revamped spending laws, the Chamber is ramping up its independent spending nationwide.

If its political donations are any indication, the Chamber is particularly interested in the California race.

According to Sunlight, which compiles data from the Federal Election Commission, the Chamber has spent more on the California race than any other by far.

Its second highest spending figure was $2 million in the Florida Senate campaign.

In California, the Chamber has bought a slew of ads.

Fiscal talk on the campaign trail

"For 28 years Barbara Boxer has been bad with our money," one ad alleges before adding, "Now she's bankrupting the Treasury, voting to add trillions to the national debt."

In response, the Boxer campaign said Friday that "the special interests" were targeting Boxer because they "know that [she] will keep fighting to reign in Wall Street abuses and stop tax breaks for companies that ship jobs overseas."

Fiorina has campaigned on her business smarts -- the notion that good management and fiscal responsibility will save the tarnished Golden State.

That appears to be a priority for the Chamber as well, which devotes a section of its website, and a lengthy report, to turning California's economy around.

"To spur job creation, the state needs a new direction," Chamber CEO Thomas Donohue said in a statement that accompanied its August report on California. "Federal and state policies must be dramatically changed in order to revitalize California's economy before other states and other nations steal away more businesses, investors, and jobs."

Fiorina has deep ties to the business world the Chamber represents. She served as the chairman and CEO of Hewlett Packard from 1999 to 2005 before being forced out by the company's board.

Before HP, she spent 20 years at AT&T and Lucent Technologies.

Help Desk
Track testing tires to find the best
Find out how TireRack tests and reviews tires and why choosing the right ones for your car is so important. Play
Markets
Data as of 11:12pm ET
Data as of 2:44pm ET
Sponsored by
Sponsors
Sections