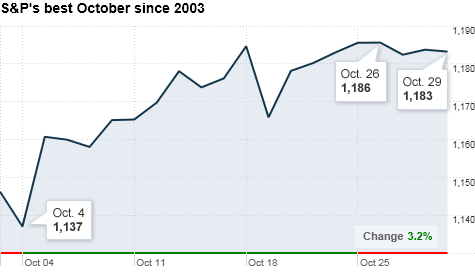 NEW YORK (CNNMoney.com) -- October was another strong month for markets, but uncertainty kept stocks in a tight range over the past week.

Now, some of that uncertainty is about to fade.

The first week of November brings three events that have the potential to shake up markets: the Federal Reserve's meeting, the midterm elections and the release of the government's October jobs report.

"We have a triple play coming up," said Doug Roberts, a chief investment strategist at Channel Capital Research. "These three events are going to overshadow everything else."

While the S&P 500 and Dow logged their best October in several years, major indexes simmered in the last week of the month as investors stayed on the sidelines amid a raft of economic reports.

"We've seen all that we need to see of the economic data, there are no surprises now -- it's still the weakest recovery we've seen in generations," said David Sandell, portfolio manager at Leeb Capital. "It's clear that we need more help, and whether it comes out of the Fed or out of Washington remains to be seen, but likely we'll see it from both."

Elections: Wall Street is banking on a win for Republicans in Tuesday's midterm elections, a change that many investors believe to be pro-business and therefore a boost to the market.

The Fed is widely expected to launch another round of monetary stimulus in an effort to boost the economy.

Just the anticipation of the move -- referred to as quantitative easing -- has pushed the S&P 500 up 11% since the Fed's intentions were announced in August. Now the question is how big the injection will actually be.

"People are wondering, 'is it going to be $500 billion? $1 trillion? $2 trillion?'," said Roberts. "If the size of the stimulus is less than expected then you might have a little bit of a sell-off, but the market would accept a smaller amount positively if [the Fed] indicates continuity with it and says it won't stop until they achieve their goals."

Jobs report: The third piece of the triple play is the government's closely watched jobs report.

Since the extent of quantitative easing is expected to be known by the time the jobs report is released Friday, investors will be eyeing it for signs of whether the Fed's action was warranted.

Employers are expected to have added 45,000 jobs in October after cutting payrolls by 95,000 the month before. The unemployment rate is expected to hold steady at 9.6%.

Home run?: If the midterm elections result in a power change, the Fed provides an appropriate boost to the economy and the jobs report shows signs of life, stocks will likely get a significant lift -- at least for the short-term.

"Everything has to fall into place correctly next week to continue going higher," said Alan Lancz, president of Alan B. Lancz & Associates.

Monday: A report on personal income and spending is due before the market open. Economists surveyed by Briefing.com expect income to have risen 0.3% in September after jumping 0.5% in August.

The Institute for Supply Management's manufacturing index for October is on tap in the morning and is expected to have edged down to 54 from 54.4 in September. Any number above 50 indicates growth in the sector.

Construction spending is forecast to have ticked down 0.5% in September, following a rise of 0.4% in August.

Tuesday: On top of midterm elections, the FOMC meeting begins and BP is slated to report results.

Wednesday: The FOMC's rate decision is due at 2:15 p.m. ET. Economists expect the Fed to leave key interest rates unchanged at a range of between 0% and 0.25%.

Payroll services firm ADP is forecast to report that employers in the private sector added 25,000 workers to their payrolls in October after cutting 39,000 in the previous month. Outplacement firm Challenger, Gray & Christmas issues its report on planned job cuts in October.

Factory orders are due from the Commerce Department. Orders are expected to have edged up 0.6% in September after slipping 0.5% in August.

The ISM services sector index for October is expected to have ticked up slightly to 53.6 from 53.2 in September.

Auto and truck sales are due throughout the day, and the government's weekly oil inventory report is also released Wednesday.

Thursday: The government's weekly jobless claims report comes out Thursday, with 450,000 Americans expected to file new claims for unemployment, after 434,000 were filed in the previous week.

October same-store sales figures from major retailers are due in the morning, along with a report on third-quarter business productivity from the Commerce.

Friday: In addition to the government's big jobs report, the National Association of Realtors releases its pending home sales index, a measure of sales contracts for existing homes.

The index is due before the start of trading and is expected to have risen 0.5% in September after rising 4.3% in August.

A report on consumer credit is forecast to show a decline of $3.8 billion in September, following a drop of $3.3 billion in the previous month.