Stocks headed higher at the open 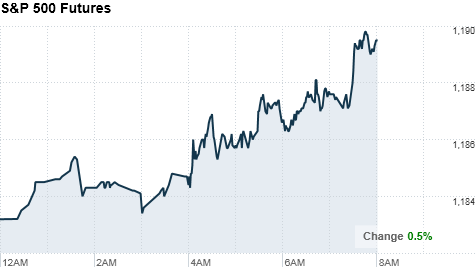 NEW YORK (CNNMoney.com) -- U.S. stocks were set to open higher Tuesday as the nation headed to the polls for the midterm election and the Federal Reserve geared up for a key two-day meeting.

"We're in a major wait-and-see mode," said Art Hogan, chief market strategist at Jefferies & Co. "You are going to be hard pressed to find someone making a large bet in today's market."

Stocks ended little changed Monday after an early advance on upbeat manufacturing data gave way to jitters ahead of a number of key developments expected later this week.

With no major economic reports on the agenda Tuesday, investors will remain focused on the midterm Congressional elections and the Fed meeting.

Many on Wall Street expect Republicans to win the 39 seats needed to take control of the House. In the Senate, the GOP would need to win 10 of the 37 of seats up for grabs to get the majority.

A Republican majority could be perceived as pro-business and therefore give a boost to the market.

Meanwhile, the Fed kicks off its two-day meeting, with a highly anticipated policy statement due Wednesday afternoon. The central bank is expected to unveil a new round of asset purchases, as part of a wider quantitative easing plan.

Investors are also looking ahead to Friday's jobs report from the Labor Department. Economists expect the report to show that employers added 60,000 jobs last month.

Companies: BP (PB), recovering from the Gulf oil spill, reported a third-quarter profit of $1.8 billion that included a $7.7 billion pretax charge related to the disaster. While the income was down from $5 billion a year earlier, it was a turnaround from the $17 billion loss posted in the prior quarter due to spill-related charges.

World markets: European stocks rose. The CAC 40 in France and the DAX in Germany were up slightly, and Britain's FTSE 100 gained over 1%.

Currencies and commodities: The dollar eased against the euro, the British pound and the Japanese yen.

The Australian dollar got a boost after Australia's central bank hiked its key interest rate a quarter percentage point.