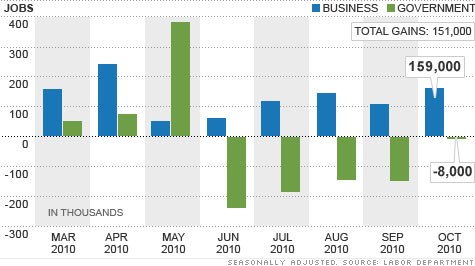 NEW YORK (CNNMoney.com) -- After months of painful losses, the economy added jobs last month, spurring hopes that the labor market may finally be turning around.

The economy added 151,000 jobs in October, the Labor Department reported Friday, an improvement over September, when the economy lost 41,000 jobs. That was much better than the 68,000 gain that economists surveyed by CNNMoney.com were expecting, and the best overall number since May.

"It's maybe an indication that we're starting to turn the corner," said Stephen Bronars, senior economist with Welch Consulting. "It's a small step, but at least we're going in the right direction. Things are definitely not going to get worse."

Businesses continued to hire for the tenth month in a row, following nearly two straight years of private sector losses. Companies added 159,000 jobs to their payrolls in October, much stronger than the 92,000 jobs economists had predicted for the sector.

But the government continued to slash jobs, shedding 8,000 workers in the month.

Only a handful of census workers were cut from government payrolls in October -- nearly the last of the temporary census jobs that have dragged down public sector job growth for the last four months.

And upward revisions for August and September showed there were 110,000 additional job gains in those months than previously reported.

The unemployment rate, which is calculated in a separate survey, remained unchanged at 9.6%, the government said Friday.

President Obama praised the numbers in an address following the announcement, but emphasized that more improvement is needed.

"We've now seen four months of private-sector job growth above 100,000, which is the first time we've seen this kind of increase in over four years," he said. "That's not good enough. The unemployment rate is still unacceptably high and we've got a lot of work to do."

While the report was a generally positive sign, the job market is still very fragile. The labor market needs about 150,000 jobs per month just to keep pace with population growth, and at least 300,000 per month to make a dent in unemployment, Bronars said.

Unemployment is likely to remain high for some time. The rate doesn't include 1.2 million discouraged workers who've stopped looking for a job.

"There are still a lot of people who have stopped looking for work because there weren't as many hires, and as they come back in, it's going to keep that unemployment rate high for a while," Bronars said.

The number of Americans who are involuntarily working part-time, fell to 9.2 million in October but still remains just shy of record highs. This category includes workers who are stuck in part-time jobs because either their hours have been cut or they can't find full-time work.

The so-called underemployment rate, which counts both discouraged workers and involuntarily part-time workers, slipped to 17% from 17.1% in September. That means more than one in six adults are still without the job they want or need.