Stocks set to slip at open 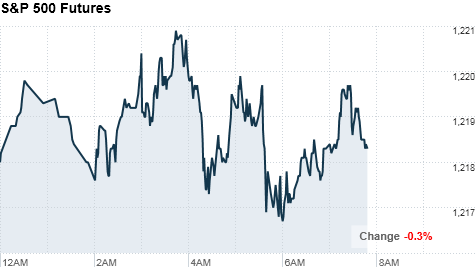 Stocks ended slightly higher Friday, but it was enough for all three major indexes to close at fresh two-year highs. The Dow ended near 11,444 -- its highest close since Sept. 8, 2008. Both the Dow and S&P also logged their biggest weekly gains in more than two months.

Gains were muted Friday despite the Labor Department's monthly jobs report, which showed the economy added a better-than-expected 151,000 jobs in October.

On Thursday, leaders of the world's major economies -- including President Obama -- will start a two-day summit in South Korea. The Group of 20 is expected to discuss recent currency tensions and other global economic challenges.

The G-20 is likely to set the tone for both currency and stock markets.

"All eyes are on the upcoming G-20 meeting, and that could set the short-term direction for U.S. currency," said Peter Cardillo, chief market economist for Avalon Partners. "I think over the next day or two markets will consolidate, with averages slipping in and out of the plus and minus column today."

In the wake of strong earnings reports, the lack of economic data in the early part of the week might result in a retreat for stocks.

"One would expect a pullback until the G-20 sets the short-term direction in currencies and equities," Cardillo said.

Economy: After the opening bell, the Fed will release its quarterly report on household net worth.

Companies: Before the bell, Sysco (SYY, Fortune 500) reported earnings per share of 51 cents, meeting the expectations of analysts surveyed by Thomson Reuters. Net earnings for the quarter dropped 8.3% from the previous reporting period to $229 million. The drop was attributed to a $39 million increase in year-over-year tax expenses. Sysco shares dropped slightly following the news.

AOL (AOL) has hired financial advisers to explore the possibility of a merger with rival Yahoo (YHOO, Fortune 500), the Wall Street Journal reported Monday. Shares of Yahoo and AOL both posted small gains in premarket trading.

Meanwhile, the Wall Street Journal also reported that the Securities and Exchange Commission has subpoenaed a number of former Citigroup (C, Fortune 500) brokers, who contend the bank misled investors on risky bond funds. Shares of Citigroup were unchanged in premarket trading.

Both the SEC and Citi declined to comment on the matter to CNN.

Currencies and commodities: The dollar strengthened against the euro and British pound, but fell against the Japanese yen.