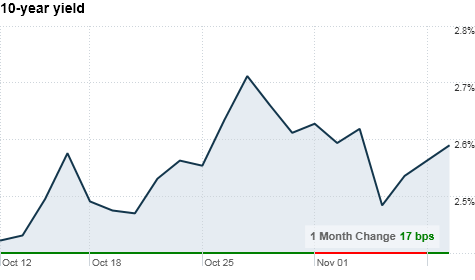 NEW YORK (CNNMoney.com) -- Treasuries struggled Tuesday, with yields rising in the afternoon as investors waded through the ripple effects of the Fed's bond-buying program.

Last week, the Fed announced it planned to purchase $600 billion of Treasuries by the second quarter of 2011.

"Some of the players are a little squeamish on the question of whether foreign holders will be selling into this," Naehu said. "It's one thing for the Fed to be buying such a large amount, but another thing if foreigners in the secondary market use it to sell."

Coupled with the G-20 at the end of the week -- and the accompanying policy rhetoric -- investors are largely playing a waiting game and taking cues from equity markets.

Auctions: Demand for U.S. Treasuries remained high for Tuesday afternoon's bond auction, in which the government offered $24 billion in 10-year notes. The bid-to-cover ration for the auction was 2.80, suggesting that demand remains robust.

On Wednesday, Treasury will conclude its auctions for the week by offering $16 billion in 30-year notes.

Bond markets will be closed on Thursday for Veterans Day.

Yields: The yield on the benchmark 10-year Treasury note moved higher to 2.66% Tuesday, from its close of 2.55% on Monday. Bond prices and yields move in opposite directions.