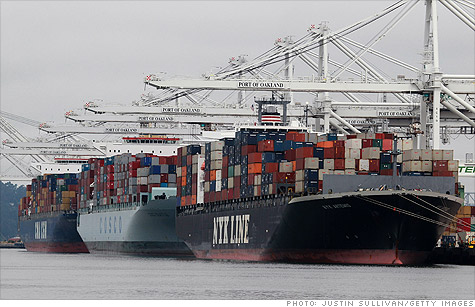 NEW YORK (CNNMoney.com) -- As global leaders prepare to debate international trade imbalances this week, both the U.S. and China announced data that points to a continued trade disparity between the world's two largest economies.

The U.S. trade gap, which measures the difference between a nation's imports and exports, narrowed slightly to $44 billion in September, the Census Bureau reported Wednesday. Exports increased only slightly, while imports dropped by 1%.

The U.S. deficit with China alone shrank slightly to $27.8 billion, but was still near record-highs.

Meanwhile, China announced a massive trade surplus, which surged to a staggering $27.2 billion in October -- a 61% increase over September's $16.9 billion surplus. China's data is one month ahead of the U.S. report. China's exports soared 22.9%, while imports grew 25.3%.

The widening trade gap between the two countries could set the stage for a confrontational meeting of G-20 nations in Seoul, South Korea this week.

China's government has said it is trying to promote more domestic consumption, to decrease its reliance on exports and narrow the trade surplus, but Wednesday's data will do little to support that claim.

"China's delegation to this week's G-20 summit will have a hard job convincing others that China's government is doing all it can to stimulate domestic spending," Mark Williams, senior China economist at Capital Economics wrote in a note to clients.

China's trade surplus with the U.S. is among the most glaring, according to Williams. In the last month, China shipped $25 billion in goods to the U.S. and bought only $7 billion in return, he said.

The United States has accused China of keeping its currency, the yuan, undervalued by buying up large reserves of foreign currencies. A cheaper yuan gives an advantage to Chinese exporters by allowing them to undercut foreign competitors.

In September, the House passed a bill that would allow for tariffs on Chinese goods. Before the bill becomes law, it must pass the Senate and be signed by President Obama.

Since then, Treasury Secretary Timothy Geithner has been urging G-20 nations to take strong action against currency manipulation, and change economic policies in countries running large trade surpluses to reduce dependence on exports.

At a meeting of finance ministers of the G-20 group of nations in Gyeongju, South Korea, last month, the ministers pledged not to engage in currency wars, but stopped short of an outright ban on currency manipulation.

In the G-20 finance ministers' closing statement, they said they would "move towards more market determined exchange rate systems that reflect underlying economic fundamentals and refrain from competitive devaluation of currencies."

The ministers added that the G-20 member nations would "continue to resist all forms of protectionist measures and seek to make significant progress to further reduce barriers to trade."

Last week, the U.S. Federal Reserve announced it would pump another $600 billion into the U.S. economy through the purchase of long-term Treasuries, a move known as quantitative easing.

But the move has drawn harsh criticism from leaders who are concerned it will devalue the dollar, and stoked fears of a "currency war" in which nations deliberately devalue their own currencies to keep their own exports competitive in the global marketplace.

On Tuesday, a Chinese rating agency downgraded its rating on the United States, warning that the Federal Reserve's bond-buying spree could trigger a creditor crisis.

China also announced on Wednesday, that it would raise the reserve requirement ratio on major banks by half a percentage point, in an attempt to control the flow of new money.

CNN's Helena Hong and Annalyn Censky contributed to this report

Major changes in store for IMF