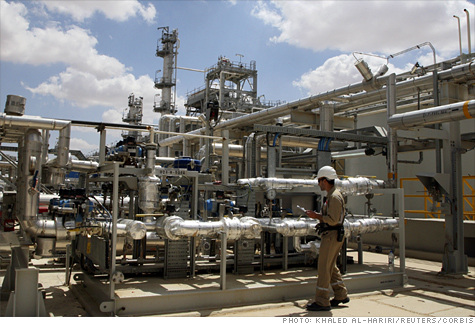 FORTUNE -- If you didn't think America's energy policy battles could get any more confusing, consider this: Some fossil fuel companies are pulling for a carbon tax. Specifically, companies that focus on cleaner-burning natural gas would benefit from subsidies for energy that generates less carbon dioxide.

But it will be almost impossible to squeeze a carbon tax through Congress in the aftermath of the midterm elections. The new Republican majority means that more politicians in power support both the coal industry and the concept of less government regulation of business.

That knocks out one strut that could have supported energy companies through a recent tough spate where they are locked into producing more gas than the market demands.

The makings of the surplus started in 2003 when Halliburton (HAL, Fortune 500) introduced a new well stimulation method called horizontal hydraulic fracturing to a shale play in Texas. The method enabled drillers to get much more gas out of wells, which ignited a gold rush on major gas plays in the United States. Companies scrambled to borrow money or go in on joint ventures to afford the drilling equipment and land leases. They started drilling, and producing, like crazy.

Recently, natural gas prices have dropped to around $4 per Btu, making it economically competitive with coal as a power source. But natural gas needs more than a favorable cost comparison to compete with coal.

Coal was here first, after all, and the fuel has not only an infrastructure for transport and distribution, but also powerful lobbyists. "The natural gas lobby just hasn't gained enough momentum or traction to overcome the money and power that the coal industry has," says Joe Magner, an analyst with Macquarie Capital USA. They're developing it, slowly, he says, but it will be a long time until natural gas is woven into the fabric of American fuel.

We can't easily export natural gas either, says Magner. Natural gas producers would need to liquefy or compress natural gas to ship it to other countries, and there aren't enough facilities to do that yet on a massive scale.

The one market natural gas could target would be fleet vehicles, says John Segrich, analyst at financial services company and portfolio manager of a green investing fund called Gabelli SRI Green Fund Inc. Influential financier T. Boone Pickens has avidly supported an effort to replace diesel fuel for fleets of vehicles with liquefied natural gas as part of his long-term push to get Americans off of foreign oil.

But shifting fleets from diesel to natural gas won't help independent drillers in the short term. "In order to meet the current economic needs, there's still too much gas being produced," says Magner.

Production won't slow down any time soon, says Segrich. "In an efficient world, once the marginal cost of your production is equal to the price, you'd shut it down."

Many independent gas companies can't do that, he says, because they have borrowed money or gone in on joint ventures with other companies to pay for drilling equipment and land. "It's likely that they have to keep producing even if the price is below the marginal cost."

"They're locked in," says Magner. "It's defying current economic logic."

Magner thinks gas-geared companies can do a several things to survive. They're going to have to move back towards oil assets, which some are doing. More and more companies have been starting to claim that they're liquids rich in oil, Magner says. For example, Cabot Oil & Gas (COG) CEO Dan Dinges stated in the first section of the company's 2009 annual report that Cabot anticipated a diminished demand for natural gas, and prepared for that by concentrating efforts on oil plays.

Independent drillers can also prepare for a dip in gas prices by hedging, says Magner. They'll need to watch spending on new projects and have plenty of accessible cash. Or they'll need to sell to a bigger oil company.

Gas could actually be a valuable asset to companies Chevron's size, says Magner. They have big, diverse energy portfolios, which gives them time to buy gas plays now and wait for the fuel infrastructure to develop. A Chevron spoksperson said much the same thing, explaining the company is thinking on a 20-30 year timeframe and plans invstments over a very long horizon.

America will eventually need a non-oil fuel, says Segrich, but it's clear to see that shift will take time. The brief dip in natural gas prices made nearly the entire sector ripe for being scooped up and bought out, and mega energy companies were ready to pounce. Only the largest, most diversified energy players can afford to wait out or hedge the unpredictable policy shifts that can temporarily make one energy source more attractive than another.

"The difference between large integrated companies vs. domestic producers is that the latter are more reliant on shorter-term production targets than cash flow," Magner says. What he means is that small gas companies are contractually obligated to produce. That might be bad for natural gas companies, and bad for the immediate prospects for carbon reduction, but it's great for Big Oil.