Bush tax cuts: What nobody is talking about 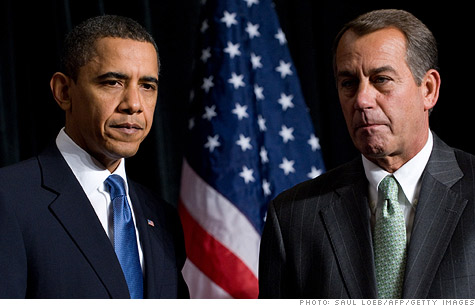 NEW YORK (CNNMoney.com) -- There will be a lot of noisy static between now and Thursday about possible compromises over the extension of the Bush tax cuts, which are set to expire Dec. 31.

Thursday is the day when President Obama and the Democratic and Republican leadership on Capitol Hill meet to formally kick off negotiations on the issue.

The starting points in the negotiations are well known: President Obama wants to make the tax cuts permanent on income up to $250,000 and let the cuts on income higher than $250,000 expire. The Republicans want to the tax cuts to be made permanent for everyone. (The Washington Punch List: Track the money issues)

Many tax policy watchers are nevertheless convinced that ultimately lawmakers will opt for a temporary one- or two-year extension for everyone.

If they're right -- or if lawmakers adopt any other type of extension for high-income households -- they'll have another big fight on their hands: how to pay for the cost.

"This is one of a handful of things that can tie-up or slow-down an across-the-board extension," said Sean West, a U.S. policy analyst for the Eurasia Group.

Under rules passed earlier this year, lawmakers are obligated to pay for any extension of the Bush tax cuts that apply to higher income households.

Those budget rules can be waived, however, if the extension is deemed "emergency spending." That's because lawmakers don't have to "pay" for emergency spending -- it just gets added to the deficit.

"The argument made for extending the cuts for everyone is that the economy is in a whole heap of hurt, and how can we afford to raise anyone's taxes now?" Stretch said.

Since there's no actual tax-cut extension legislation written yet, there's no formal estimate of how much it would cost to extend the upper-income tax cuts for a year or two.

But the cost is likely to range between $70 billion and $140 billion. A permanent extension would cost $700 billion over 10 years, according to Treasury Department estimates.

"I don't see any way to pay for it," said Anne Mathias, director of research at MF Global's Washington Research Group.

That's because there is no appetite on the part of Republicans to find that kind of revenue elsewhere in the budget -- or any desire by most Democrats to cut government spending during a tepid economic recovery.

Even if the endgame is to add the cost of high-income tax cut extensions to the deficit, that doesn't mean there won't be a lot of negotiating in the run-up to that decision.

"There will be lots of noise about the need to pay for any upper-end extension from Democrats and perhaps the White House; Republicans will insist tax breaks don't need to be paid for," West said.

But expect a very loud silence from both sides of the aisle on a much pricier decision: No one is pushing to pay for the far greater cost of extending the cuts for the middle class, which are automatically exempt from pay-go rules.

If lawmakers opt to make the middle class tax cuts permanent that will add an estimated $3 trillion to the country's debt over 10 years. A two-year extension could cost roughly $383 billion.