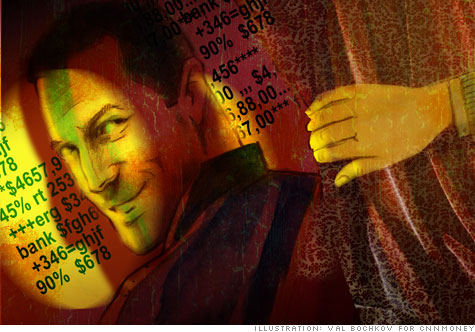 NEW YORK (CNNMoney) -- Think Google knows everything about you? Wait until you meet Yodlee.

The company knows where you invest your money and how much you owe on your mortgage. It knows your credit card numbers, the amount of your weekly paycheck, and how much you really spend on shoes.

If you've banked online, you've probably used Yodlee without even knowing it. More than 200 financial institutions, including Citibank and Bank of America use its services, touching nearly 26 million consumers. Your bank probably uses its technology, too, though Yodlee doesn't like to name names.

Yodlee is the proverbial man behind the curtain. So what, exactly, does he do?

When you log into your bank and transfer money between your savings and checking accounts, that's Yodlee providing to the technology to make the transaction happen. Paying a bill online? Yodlee. Signing up for a new account? Yodlee. Analyze how much you spend? Yodlee.

Then there are its fancier financial-management tools. Yodlee can aggregate all of consumer's financial information and serve it up to a bank or personal finance website, such as Mint.com, allowing you to see your financial health in one snapshot.

For example, on Bank of America's website, customers can see all of their bank accounts in one place. Behind the scenes, Yodlee has scraped your financial data from your various lenders -- student loans, mortgage holder, credit cards, 401(k), checking, savings -- and fed it to Bank of America. (With your log-ins and permissions, of course. But more on that later.) That way, you can analyze spending, budget and set goals across all of your accounts.

"Unlike Facebook and Google, which are very visible, Yodlee has quietly powered the same kind of services across every bank," said Schwark Satyavolu, who co-founded Yodlee and worked there for eight years before moving on to start his own company, an online personal finance startup called BillShrink. "Yodlee is the 800-pound gorilla in the room, but you may not even realize it's there."

It's also the only gorilla in the room. Founded in 1999, the Redwood City, Calif.-based company has a strong head start on its few competitors, such as Geezeo and Strands.

"Yodlee was clearly the most innovative and technologically savvy from a cultural standpoint -- they were all about taking calculated risks," said Devon Kinkead, CEO of Micronotes, a new startup that is using Yodlee's services. "What they've done is build a platform and invited a bunch of sharp, innovative companies and the top banks, so they are extremely well-positioned for growth and have become very hard to compete with."

In fact, some competitors -- like Strands -- are actually turning to Yodlee for their data aggregation services.

"Even their so-called competitors are their customers, which is a pretty good situation to be in," said Ron Shevlin, a senior analyst specializing in retail banking at Aite Group. "While the market isn't going to get handed to them, given their capabilities and their history, they have a good shot of staying on top."

And for some companies, working with Yodlee has been a life-or-death decision. Wesabe, an early financial-management site, attributes its failure to spurning Yodlee. Wesabe was a competitor to Mint.com, and one chose to work with Yodlee, and one did not.

"Since [Yodlee] had effectively no competitors, we didn't believe we should tie our company to a single-source provider," Wesabe founder Marc Hedlund recently wrote in his blog. "Mint used Yodlee... to automatically get user's data from bank sites and import them into Mint, and as a result had a much easier user experience getting bank data imported."

Mint.com is now considered the leader in the personal finance management space and was recently acquired by Intuit. As part of the deal, however, it is transitioning to Intuit's internal aggregation system, rather than Yodlee's.

One reason Wesabe gave for avoiding Yodlee was its finances, something that had concerned Mint, as well. Particularly, Mint said it was concerned because the company had yet to be acquired.

"That's always been a concern," said Aaron Patzer, vice president of Intuit Personal Finance and founder of Mint.com. "They've been around for 11 years so it's less of a concern now, but since they're a private company it's hard to know how they're doing."

Yodlee, which is backed by investors such as Accel and Warburg Pincus, said it has seen revenue climb more than 30% over the past three years and now has 700 employees.

"Our financials are extraordinarily solid," said Yodlee's chief marketing and strategy officer, Joe Polverari. "In terms of not being acquired, our objective is not to be the classic model of 'pump it up and hype it up' so someone will buy it -- our goal was to be the next real financial services platform."

But Shevlin said he can think of a number of companies that likely have Yodlee on their radar.

"The tech firms that provide all the really boring core applications for managing transactions to banks -- that space has really been consolidating," he said. "Fidelity Information Services, Fiserv, Jack Henry -- any one of them could be good candidates for acquiring Yodlee and creating a single stop shop for banks."

So, with Yodlee having such broad access to consumer information, should you be worried about your privacy?

"There's no reason that anyone should be any more concerned about Yodlee's security than their bank's security, or any other firm they do business with online," Shevlin said.

Yodlee is audited and supervised by the federal government, much like a bank. It is also audited by the financial institutions it works with. And, said Polverari, Yodlee has never had a security breach.

"The proof of the pudding is that we have had all the major banks audit every single piece of our infrastructure -- everything from our data center to our office -- and we've taken that cumulative feedback from all the banks and turned Yodlee into a fortress," said Satyavolu. "Not only is it secure, but with [Yodlee's] privacy policy, an individual's financial data is completely unusable."