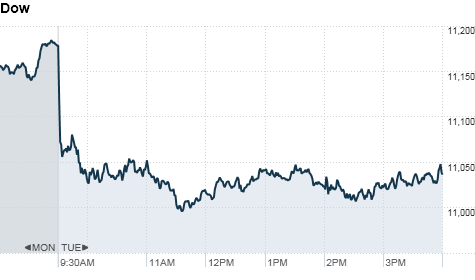 NEW YORK (CNNMoney.com) -- Stocks ran into a wall of worry Tuesday as violence erupted on the Korean peninsula, concerns about Europe's debt crisis expanded and the Federal Reserve issued a dour economic outlook.

The retreat was sparked by an exchange of artillery fire along the disputed sea border between North and South Korea Tuesday morning. The skirmish, which killed two South Korean soldiers and wounded several civilians, was one of the worst since the Korean War of the 1950s ended in armistice.

Dan Cook, chief executive at IG Markets, said thin trading volumes could be amplifying the market's reaction to the Korean hostilities, "but this is still major," he added.

"The uncertainty is so great and the implications could be huge," he said. "People are getting out of risk assets and in some cases going to cash," he added

In the currency market, the U.S. dollar and the Japanese yen both rose sharply. Gold prices and U.S. Treasuries also moved higher as investors flocked to safe haven assets.

The stock declines were broad based. Hewlett Packard (HPQ, Fortune 500) was the only Dow stock in the black. Shares of the computer maker rose 0.9%, after it reported better-than-expected quarterly results.

Concerns about long-term debt problems facing some major European economies had already been hanging over the market this week.

Investors are growing nervous about Spain and Portugal after officials in Ireland officially requested loans from the European Union and the International Monetary Fund over the weekend.

"Portugal is almost assuredly going to take a bailout," said Dan Greenhaus, chief market strategist with Miller Taback & Co. "The question then becomes how much Spain will need," he said, adding that estimates range between $300 billion and $400 billion.

Meanwhile, the Federal Reserve lowered its outlook for U.S. economic growth this year and next. The central bank also projected that unemployment would remain elevated into next year, according to meeting minutes.

But the bleak forecast was expected, and investors are more concerned about geopolitical risks, according to Greenhaus.

Traders said the market could be choppy this week, with many money managers taking time off ahead of the Thanksgiving holiday. All U.S. markets will be closed Thursday.

Stocks ended mixed Monday, as shares of big banks fell after federal law enforcement officials searched the offices of three prominent hedge funds, in what is said to be a large-scale insider trading probe.

Economy: The Federal Reserve lowered its estimates for U.S. economic growth this year and next, and raised its outlook for unemployment.

Minutes from the Fed's most recent policy meeting showed that officials were divided over the central bank's recent plan to boost the economy by purchasing $600 billion in U.S. Treasuries.

On the housing front, existing home sales declined 2.2% to a seasonally adjusted annual rate of 4.43 million in October from 4.53 million in September, according to the National Association of Realtors. Economists had expected a sales rate of 4.42 million in the month.

Companies: Clothing retailer J. Crew (JCG) agreed to be acquired by buyout firms TPG Capital and Leonard Green & Partners for $2.8 billion. Shares of J. Crew rose about 16% shares had been halted most of the morning after rallying as much as 22% in premarket trading.

Blackstone Group's pursuit of electric power provider Dynegy (DYN) has come to an end after activist shareholders objected to the takeover, Dynegy said in a statement.

World markets: The tensions in Korea dragged stock prices lower around the world.

Currencies and commodities: The dollar strengthened against the euro and the British pound, but remained weak versus the Japanese yen.