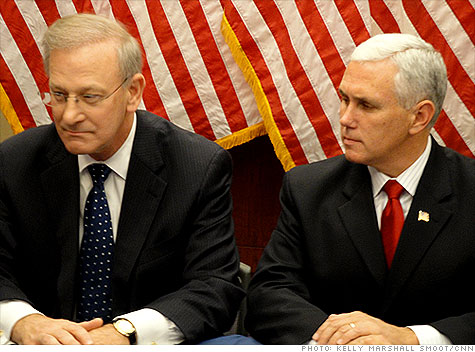 For more than 30 years, the Fed has been tasked with a so-called dual mandate, which outlines two important goals: keep prices stable and maximize U.S. employment.

But some critics are sick and tired of the Fed prioritizing job creation at the risk of rising prices. They say the juggling act of promoting economic growth while staving off inflation has proven ineffective, and has led to a policy of too much cheap money with dangerous consequences for the economy.

"The American people have been witness to an era of unprecedented borrowing and spending by the national government," Rep. Mike Pence, a Republican from Indiana, told CNNMoney Thursday. "I know that the Fed can't spend us back to prosperity."

The Fed's recent bond-buying program for example -- referred to as quantitative easing -- has drawn a backlash from conservatives who fear the policy will result in high inflation and a weaker dollar.

A House bill introduced last month by Pence seeks to scale the dual mandate back to a single goal of focusing only on prices, and leave job creation policy up to Congress.

"The Fed can print money, but they can't print jobs," he said. "Printing money is no substitute for sound fiscal policy and we ought to be looking to the Congress to embrace the kind of policies that will get this economy moving again."

Pence invited the most outspoken member of the Fed, Thomas Hoenig, to meet with House Republicans behind closed doors Thursday. Their discussion was "very candid and frank," Pence said, and focused mainly on Hoenig's dissent to quantitative easing, but the topic of the dual mandate also came up.

Hoenig, the president of the Federal Reserve Bank of Kansas City, is known for hawkish stance on inflation, and is the only member of the Fed's policy-making committee that has consistently voted against the Fed's policy of keeping interest rates rates near 0% for an extended period.

Hoenig fears low interest rates will fuel prices to rise to an unsustainable level over the long term and create potential asset bubbles.

While Hoenig has not publicly said he would support scaling back the Fed's dual mandate, at least one Fed official has.

"It would be OK with me," James Bullard, president of the Federal Reserve Bank of St. Louis, said in an interview with Fox Business Wednesday.

Rep. Paul Ryan, a Republican from Wisconsin, and conservative-leaning economist John Taylor of Stanford University, are also calling on Congress to change the Federal Reserve Act, which establishes the dual mandate.

"It is time for common-sense reforms that refocus the Fed on sound monetary policy and remove it from contentious political debates over what policies are best to achieve other national goals," they said in an editorial on Investors.com Tuesday.

Like Pence, they argue that the Fed has failed to make a significant dent in the unemployment rate, which currently stands at 9.6%.

They also claim that the Fed held interest rates too low for too long, leading up to and even fueling the housing bubble.

But Pence's bill is a long way from becoming law. Just three days after he introduced the legislation, Treasury Secretary Timothy Geithner warned Congress against politicizing the Fed and said the White House would block any effort to change the dual mandate.

And some say that changing the Fed's dual mandate wouldn't really do any good since the Fed could still make the case for low interest rates as an anti-deflationary measure.

"I am skeptical. If the Fed's mandate were different, monetary policy today might well be the same," Harvard economist Greg Mankiw said on his blog Wednesday, pointing to currently low prices, teetering dangerously close to deflation.

"Looking ahead, the Fed believes that inflation too low, even deflation, is a larger risk than inflation too high, so it is engaging in expansionary policy to get inflation back on target," he said.