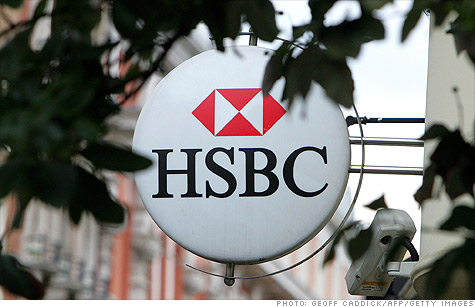 NEW YORK (CNNMoney.com) -- The court-appointed trustee liquidating Bernard Madoff's former investment firm has filed a lawsuit against HSBC for $9 billion for allegedly aiding the most massive Ponzi scheme in history.

The trustee, Irving Picard, alleged that London-based HSBC Holdings PLC (HBC) enabled Madoff's fraud "through the creation, marketing and support of an international network of a dozen feeder funds based in Europe, the Caribbean, and Central America," in a statement released Sunday.

He claimed that HSBC and the feeder funds funneled more than $8.9 billion to Madoff's fraudulent investment advisory business, and earned hundreds of millions of dollars despite being "well aware" of the fraud after accounting firm KPMG twice notified the bank of "serious risks."

"Had HSBC and the defendants reacted appropriately to such warnings and other obvious badges of fraud outlined in the complaint, the Madoff Ponzi scheme would have collapsed years, billions of dollars, and countless victims sooner," Picard said in the statement.

David Sheehan, counsel for the trustee, said HSBC and the feeder funds' "financial sophistication" gave them insight to Madoff's scheme "long before his confession and arrest," but "each possessed a strong financial incentive to participate in, perpetuate and stay silent about Madoff's fraudulent scheme."

HSBC spokesman Adrian Russell said the "claims of wrongdoing are unfounded," and the bank will "defend itself vigorously."

The lawsuit, filed in federal bankruptcy court in Manhattan, is the latest in a wave of complaints Picard has filed ahead of the two-year anniversary of Madoff's arrest on Dec. 11. Most recently, he went after JPMorgan Chase (JPM, Fortune 500) for $6.4 billion.

Madoff, 72, pleaded guilty in March 2009 to 11 counts related to running the Ponzi scheme and was sentenced to 150 years in prison. He is incarcerated at a federal medium security facility in Butner, N.C.

Using his investment firm as a front, Madoff claimed to be investing his clients' money. He kept the fraud going by using deposits from new clients to provide so-called returns to more mature clients. But in reality, he was stealing the money and there were no returns.

In a recent tally, on Nov. 26, the trustee said it had recognized 2,309 claims worth more than $5.8 billion from victims of Madoff's scheme.

-- An earlier version of this story erroneously stated the amount that Picard accused the defendants of earning.

JPMorgan and Madoff: tighter than you thought?