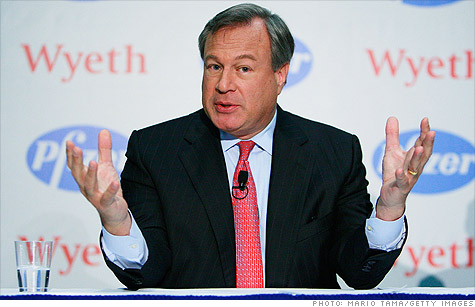 Jeff Kindler retires from his position as CEO of Pfizer. By Catherine Clifford, staff reporterDecember 6, 2010: 8:13 AM ET

NEW YORK (CNNMoney.com) -- Pfizer said CEO Jeffrey Kindler has retired from the job because it had been "extremely demanding" on him personally.

The drug maker named the head of its global biopharmaceutical operations, Ian Read, as Kindler's successor.

"The combination of meeting the requirements of our many stakeholders around the world and the 24/7 nature of my responsibilities has made this period extremely demanding on me personally," said Kindler in a prepared statement released late Sunday. "I am excited at the opportunity to recharge my batteries, spend some rare time with my family, and prepare for the next challenge in my career."

Kindler had been at Pfizer for 9 years and CEO for four and a half of those years.

During Kindler's time at the helm, Pfizer acquired Wyeth, completing the transaction on Oct. 15, 2009. Since then, the work force has been reduced by 6,900 workers.

Cashing in on Corporate America's $1 trillion

Help Desk
Track testing tires to find the best
Find out how TireRack tests and reviews tires and why choosing the right ones for your car is so important. Play
Markets
Data as of Nov 25
Data as of 2:44pm ET
Sponsored by
Sponsors
Sections