Stocks give up gains, end mixed 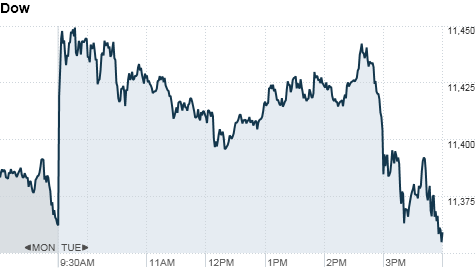 Stocks held gains for most of the day as investors welcomed news that President Obama had reached a deal with Republican lawmakers Monday that would extend Bush-era tax cuts for two years and unemployment benefits for 13 months. It would also lower the payroll tax by two percentage points for a year.

But the momentum faded late in the day after Obama, who had wanted the cuts for high-earning taxpayers to expire, said in a press conference that he would push to have them eliminated after the two-year extension is over.

"This gives us the time to have this political battle without having the same casualties for the American people," he said.

Obama said the compromise was necessary to prevent taxes from going up for middle-class taxpayers. But it also reflects the newfound clout Republicans have on Capitol Hill following last month's upset in the midterm elections.

Peter Boockvar, chief market strategist with Miller Taback & Co., said the market turned lower following a report that the government's crackdown on insider trading is accelerating. But he said investors were also nervous about a major sell-off in the bond market.

"I think it has more to do with the shellacking in the bond market," he said. While the deal to extend tax cuts was a positive, "investors can't ignore the spike in interest rates," he added.

The yield on the 10-year Treasury note jumped to its highest level since June, stoking worries that a rising interest rates could slow the sluggish economic recovery.

Stocks ended Monday's session mixed after drifting around breakeven for most of the day. Investors spent most of the day mulling over Federal Reserve chairman Ben Bernanke's pessimistic comments about the nation's economy.

That gives the government a $12 billion profit, including dividends and interest payments, on its $45 billion Citi bailout. Company stock rose 14 cents, or 4%, to $4.60 per share.

AGL Resources (AGL) and Nicor Inc. (GAS) announced a merger creating a leading U.S. natural gas distribution company. The combined company will be known as AGL Resources. Shares of AGL were down 5.8%, while shares of Nicor rallied 4%.

Currencies and commodities: The dollar rose versus the euro and the yen, but remained weak against the U.K. pound.

Economy: Consumer credit increased $3.3 billion in October, according to the Federal Reserve. Economists surveyed by Briefing.com had expected a $2.5 billion decrease. This follows September's $2.1 billion increase in consumer credit.

Bonds: The price on the benchmark 10-year U.S. Treasury fell, pushing the yield up to 3.16% -- a level not seen since late June.