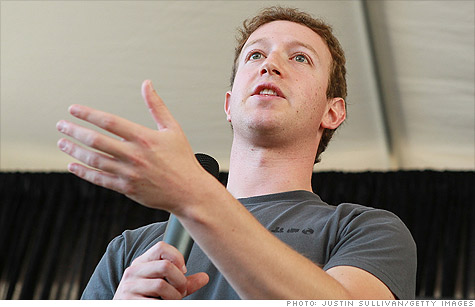 Facebook founder Mark Zuckerberg has agreed to give away the majority of his fortune, joining Warren Buffett and other wealthy Americans. By Mark M. Meinero, assistant managing editorDecember 9, 2010: 8:25 AM ET

NEW YORK (CNNMoney.com) -- Facebook founder Mark Zuckerberg is among 17 wealthy American families and individuals who have joined a promise to donate the bulk of their fortunes to charity, according to a group that supports the idea.

"People wait until late in their career to give back. But why wait when there is so much to be done?," Zuckerberg said in a statement issued by The Giving Pledge. "With a generation of younger folks who have thrived on the success of their companies, there is a big opportunity for many of us to give back earlier in our lifetime and see the impact of our philanthropic efforts."

"I'm delighted to welcome these 17 families into the Giving Pledge community," said Buffett. "In just a few short months we've made good progress. The Giving Pledge has re-energized people thinking about philanthropy and I look forward to many more conversations with families who are truly fortunate, and whose generosity can and will change lives."

The Giving Pledge, in a statement online, says its participants have agreed to give away the majority of their wealth -- either during or after their lifetime -- to charities of their choice. The promise is not legally binding, according to the statement.