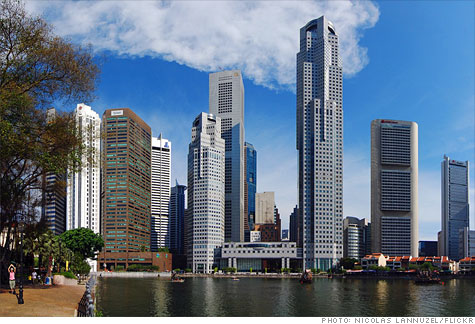 FORTUNE -- Virtually every high-end Singapore real estate agent has an anecdote about the immense wealth of Chinese clients. China's business elite is coming in flocks, they say, and buying in flocks as well. If one CEO ponies up for a $15 million abode, his buddies do the same.

The Singaporean property market has been white-hot over the past 15 months, and the island country is now vying with Hong Kong as the most buoyant market in the world. Property prices in Singapore surged 14% percent in the twelve months through September, and the high-end market has shot up even more dramatically.

This jump isn't entirely surprising, given Asia's blistering growth, fears of property bubbles in China and Hong Kong, and Singapore's transparent tax policy and regulation. In a survey published last week by PricewaterhouseCoopers and the Urban Land Institute, Singapore ranked as the best real estate destination in Asia.

Waterfront property, like the bungalows at Sentosa Cove, the city's beach area where foreigners can buy property, is relatively new to Singapore's upscale market and is particularly sought after. One Sentosa bungalow sold to a Chinese national for $26 million last summer. Developers are now scrambling to go above and beyond adding features like private elevators, club memberships, and chefs-on-demand. Some residences near the prestigious Orchard Road shopping district boast invite-only buildings.

The booming market isn't going unnoticed by Westerners, either. Although property restrictions prevent foreigners from buying property in certain parts of the city, corporations and investment funds, wanting a greater presence in the Asian-Pacific market, are snapping up more units. According to DTZ, a research consultancy, companies buying units in bulk increased from 2% to 3% in the third quarter.

The crème de la crème of the market is the so-called "Good Class Bungalows," or GCBs, a term coined by the government to designate properties with no less than 15,000 square feet of land, a true luxury in land-scarce Singapore. There are only about 2,500 in total -- and they are being snapped up at both a torrid rate and at jaw-dropping prices. Sales of 54 GCBs in the first half of the year averaged nearly $15 million apiece.

Developers, as one might expect, have enjoyed heady profits. SC Global, a niche developer of properties for the super rich (the company is famous for The Marq, a high rise where each apartment boasts its own 15m lap pool), posted a six-fold jump in net profit to $33.4 million for the third quarter from a year ago. The Far East Organization, the largest private property developer in Singapore, announced plans in June to launch Inessence, a new "ultra luxury development arm."

Designers, too, are trying to position themselves in front of the wave. International architects and designer products are high on the list of must-haves. Space, a high-end furniture retailer known for its European brands, announced in August its plan for a Singapore flagship store to open next year. The company says the increase in luxury properties in the city-state has made for a lucrative dynamic.

The question on everybody's mind is how long the property gold rush will last. Singapore's boomtown went bust after the Asian Financial Crisis in 1997, and saw a major collapse in housing prices during the recent global financial crisis, after residential property prices rose 60% between 2005 and the middle of 2008. The growth of the Asian tigers is expected to moderate in 2011, and some insiders say they're already seeing a slow-down in the luxury market.

Regulation, too, could play a role cooling the market. Soaring prices are not good for local politics, and the property market is becoming the battleground for critics of the Singaporean government.

Since September 2009, the government has introduced three rounds of cooling measures, including new taxes and higher up-front cash requirements, mainly aimed at preventing speculation in the low to mid-level market. On November 25, it announced a large land sale to the private sector to further temper prices, suggesting that a fourth round of cooling measures might be on the horizon.

These measures may well have teeth, but so far they've had little effect in slowing down the housing boom. Sheer demographics strike a chord of caution for anyone considering betting against Singaporean property. Singapore's competitive advantage is that it strives to attract foreign talent. The government says that by 2015, it hopes to bring the percentage of foreigners above 35%, where it stands today.

With such scarce land, slow growth in the West, and Asia's rich getting richer and more numerous, the strategy of many Singaporean high-end real estate firms may hold up.