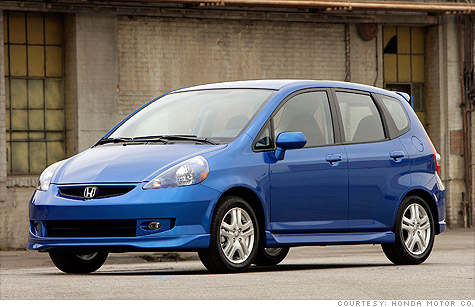 Honda is recalling 1.3 million Fit cars because of potential problems with headlights. By Aaron Smith, staff writerDecember 16, 2010: 11:38 AM ET

Honda Motor Co. (HMC) said it will recall 1,355,217 Honda Fit cars globally from model years 2007 and 2008 because of a "potential loss of low-beam headlight functionality."

Honda said the problem stems from plating on the wiring harness connectors for the low-beam circuit, which "can become worn after repeated use." Worn plating could corrode "and cause the connector to overheat and fail, resulting in a loss of low-beam headlight functionality," Honda said in a statement.

The American division of Honda said the recall includes 143,083 Fit vehicles in the U.S.

Owners of these vehicles should bring them to a Honda dealer for inspection and for possible replacement of worn parts, the automaker said.

No accidents have been reported as a result of this problem, Honda said.