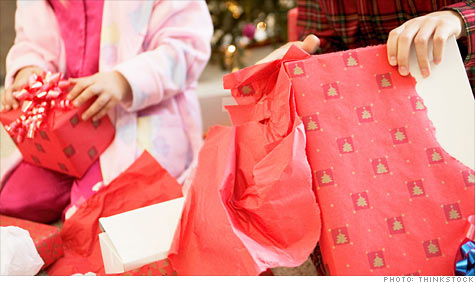 What a waste: American households, on average, produce 25% more trash between Thanksgiving and New Year's Day, according to the Environmental Protection Agency. By Parija Kavilanz, senior writerDecember 17, 2010: 3:13 PM ET

NEW YORK (CNNMoney.com) -- 'Tis the season to be jolly, and unfortunately, to toss also out a lot of trash.

In the period between Thanksgiving and New Year's, American households generate 25% more waste. That's about 1 million extra tons of trash each year, according to the Environmental Protection Agency.

That includes everything from food to wrapping paper, holiday decorations, packaging, and old cellphones and laptops that are unceremoniously dumped as soon as the latest models emerge from under the Christmas tree.

"The holiday season is especially important for us because all of the festivities, gift giving and traveling does create a lot more waste than at other times of the year," said Jennifer Berry, spokeswoman with Scottsdale, Arizona-based Earth911.

"People get so caught up in the fun that they forget about the environmental impact of these activities," said Berry.

Earth911 provides local resources about recycling centers as well as tips on how to recycle and pollution prevention. It has a large network of over 127,000 programs nationwide.

Linda Gabor, vice president of marketing for Call2Recycle, which operates a free rechargeable battery and cell phone collection program in North America says that during this season of giving, people should also give some thought to the waste they create.

"After all the gifts are opened on Christmas, this is one last gift that people can give each other that doesn't require any ribbons or bows," said Gabor. "Cut down on trash, recycle and and properly dispose your garbage."

Despite the annual surge in waste during the holidays, Gabor and Berry are encouraged by the recent trends.

In 2008, Americans generated about 250 million tons of trash and recycled and composted 83 million tons of this material, at about a 33.2% percent recycling rate, according to the latest available data from the EPA.

The agency said the nation's recycling rate has remained fairly steady in the past few years.

Also, Gabor said her company's collection of rechargeable batteries and cell phones through programs it runs with retailers such as RadioShack and Best Buy (BBY, Fortune 500) is up double digits in 2010 over last year.

"This shows that when people are shopping for toys or gadgets, they are taking that extra step and bringing in their old batteries and cellphones for recycling," Gabor said.

Said Berry, "Recycling is really the most accessible way for consumers to participate in sustainability."

Here are a few simple ways to reduce your holiday waste: