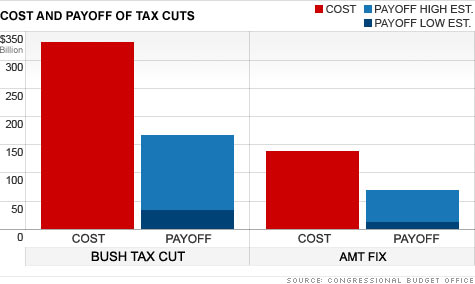 NEW YORK (CNNMoney.com) -- The tax package passed by Congress has a bigger price tag than any other economic stimulus in history, but not much bang for all of those bucks.

The Congressional Budget Office estimates that the package has a total price tag of $858 billion, topping both the $700 billion Troubled Asset Relief Program, which bailed out the nation's banks and automakers, and the $787 billion stimulus signed into law in February 2009.

The new tax package includes an extension of the Bush-era tax cuts, a reduction in the estate tax threshold, a patch for the alternative minimum tax, a partial one-year payroll tax holiday and some additional tax breaks for businesses that invest in plants and equipment.

The package was sold as a form of stimulus, which supporters of the measure argue is necessary to keep the still-struggling U.S. economy growing.

But many economists say it will drag the country deeper into debt, while doing little to spur growth.

And at a price tag of almost $900 billion at a time when the national debt is sky high, the proposal is considered a pretty big risk. That's why even some Republicans who like the idea of lower taxes are opposing the bill. (Stimulus vs. debt: An analysis)

"Last November the American people did not vote for more deficits, more stimulus or more uncertainty in the tax code, that's just what this lame duck Congress is about to give them," said Rep. Mike Pence, R-Ind., in comments during House debate on the measure.

How the bill would affect you

While the CBO hasn't tried to calculate the economic impact of this specific package, it has previously looked at the effectiveness of many of the same proposals that made it into this legislation.

Most of the current tax package doesn't fare very well. And some of the most expensive parts produce the least economic gain.

Extending the Bush tax cuts is the costliest proposal in the measure, but returns just 10 to 40 cents on every dollar spent, the CBO said. So does granting relief from the AMT, which is the second-largest expense in the bill.

Extending the Bush tax cuts for another two years will cost $330 billion, while the AMT fix costs another $136 billion, resulting in a combined loss of $280-$420 billion.

Tax breaks for employers investing in plants or equipment returns between 20 cents and $1.00 for every dollar of lost revenue. But it is among the smallest tax proposals in the bill, costing about $21 billion over the next 20 years. And many economists question whether it'll do any good, since business are still reluctant to spend their cash.

"What businesses need are customers. They have excess capacity, so a tax incentive to invest won't likely have much impact," said John Irons, research and policy director of the Economic Policy Institute, a liberal think tank.

The tax cut with the potential to do the most for the economy is the payroll tax holiday, which will cost about $114 billion, and is estimated to be a fairly effective way to pump money into the economy, returning between 30 to 90 cents to the dollar.

But the current proposal only gives workers a break on their half of the Social Security tax. Employers pay the other half. According to CBO's analysis, giving the break to employers rather than employees would have been the more effective stimulus, returning between 40 cents and $1.20.

And economists say the estate tax break, which will cost $68 billion in lost tax revenue, has little economic impact because it mostly affects the already affluent, who are less likely to spend their tax savings.

Much of the help included in the 2009 stimulus that is missing from this package, such as investment in infrastructure and aid to state and local governments, is more effective than any of the current tax break proposals, according to CBO.

The extension of unemployment benefits was by far the most effective proposal in the current bill, returning between 70 cents to $1.90 for every dollar spent on the program, according to CBO. But it's also one of the least expensive parts of the plan, with limited return.

"If you give it a grade, it's both an A- and a D," said Irons. "It's hard to grade the package since it's a complete mixed bag."

While many economists favor more stimulus, even some of supporters of the plan concede that the bill currently on the table is a relatively ineffective way to pump money into the economy.

Evidence from past tax breaks show that only about two-thirds of the money put into the average taxpayer's pocket will be spent, said Mark Zandi, chief economist of Moody's Analytics. The rest will be saved or used to pay down debt, adding little to the economy.

He says that while the proposal isn't perfect, rejecting it would risk another recession.

"This is not what I would design if I was king," said Zandi, "but given the political constraints and the need to get something done before beginning of year, this is about the best we could hope for."

Tax cut bill: Is it worth the cost?