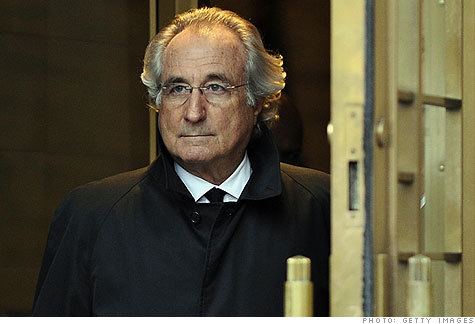 Investigators have jumped a major hurdle in recouping the money stolen by Ponzi mastermind Bernard Madoff. In squeezing out the largest forfeiture settlement in U.S. history, the government is about halfway done recovering the stolen assets of history's largest Ponzi scheme.

Preet Bharara, U.S. Attorney for the Southern District of New York, Irving Picard, the court-appointed trustee in the asset recovery process, and other federal investigators reached a $7.2 billion settlement with the widow of Jeffry Picower, Madoff's biggest beneficiary.

Picower, who died of a heart attack last year, withdrew $7.8 billion from Madoff's investment firm since the 1970s, even though he only deposited $619 million, according to the trustee.

That's why the feds went after Picower's widow, Barbara, for $7.2 billion. The settlement, combined with the $2.6 billion that was already recovered from other sources, means that investigators are nearly halfway to recovering $20 billion in stolen assets.

The investigators have been busy in the two years since Madoff's arrest, scouring the earth for his assets, including his $7 million Manhattan penthouse, his homes in France and Florida, his yacht named "The Bull," and his gem-studded watches.

The U.S. Marshals have put many of the items on the auction block. The value of some of the items, like his wife Ruth's diamond-encrusted Tiffany jewelry, is obvious. Other items, like the satin Mets jacket with the name "Madoff" emblazoned on the back, brought nearly $15,000 at auction despite its lack of precious stones.

All of this has added up to billions of dollars that will be used to compensate the victims. The trustee has acknowledged nearly $5.9 billion worth of claims from 2,363 claimants. A portion of that money -- $768 million -- will be covered by insurance from the Securities Investor Protection Corp. The rest of it will be covered by seized assets.

The majority of the $20 billion in losses has not yet been recognized by the trustee. According to SIPC President Stephen Harbeck, most of those outstanding losses were suffered by hedge funds that withdrew money they had invested with Madoff's firm. The losses will not be recognized until they pay back the money they withdrew, he said.

The trustee is also using litigation to hunt down the money. Picard aggressively ramped up litigation in recent weeks, filing lawsuits against Madoff family members for tens of millions of dollars, including Madoff's son Mark, who killed himself last week on the second anniversary of his father's arrest.

The trustee has also sued at least 400 investors who, like Picower, withdrew more than they deposited into Madoff's firm. But unlike Picower, some of those investors wound up destitute once the firm collapsed at the end of 2008. With the understanding that many of the investors did not know they were benefiting from a Ponzi scheme, the trustee said he might drop some of the suits in "hardship" cases.

The trustee has also sued financial firms for their alleged involvement with Madoff, including UBS (UBS), JPMorgan (JPM, Fortune 500) and HSBC (HBC). His accountants have also been sued, for $900 million, amid allegations that they helped him conceal the fraud.

The largest lawsuit occurred on Dec. 11, the day before the second anniversary of Madoff's arrest. That's when the trustee sued Austrian banker Sonja Kohn, along with Bank Austria, UniCredit and six of her family members, for a whopping $19.6 billion.

The trustee accused Kohn of wooing fresh victims and funneling them into Madoff's Ponzi scheme. Madoff allegedly paid her to do this for decades, starting in the 1980s.

Madoff ran what is believed to be the longest-running Ponzi scheme ever. The toll is massive, with more than 16,000 people claiming to have been victimized. The majority of them, more than 60%, will never get their money back because they're considered "third party" investors who put their money into feeder funds.

Eventually, the funds dried up and his scam collapsed. Madoff was arrested on Dec. 12, 2008, and pleaded guilty the following March. He is currently languishing in a medium security federal prison in Butner, N.C., where he is serving a 150-year sentence.