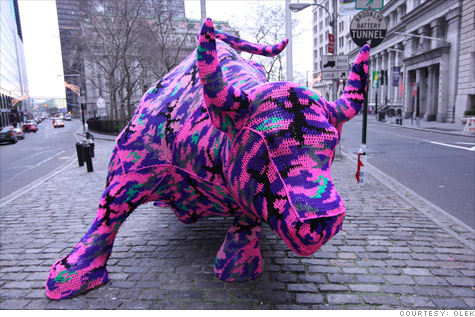 Olek, a New York based guerrilla artist sends her warmest wishes. 'This crocheted cover represents my best wishes to all of us. It will be a great, prosperous year with many wonderful surprises!' By Octavio BlancoDecember 28, 2010: 3:50 PM ET

NEW YORK (CNNMoney.com) -- As many Americans were spending Christmas night with their families, Olek, a New York based artist was near Wall Street, freezing her fingers to the bone while outfitting the famous "Charging Bull" into a giant knitted cozy.

Why did she feel compelled to crochet a sweater for the brass Bull? Partly, it was because of the economy and partly because she was homesick.

Olek is originally from Poland, but when she couldn't make it home to see her family, she thought of all the others who might be spending this holiday far from their loved ones.

The crocheted Charging Bull is her Christmas gift to NYC, she says, and a tribute to the sculptor of the bull, Arturo Di Modica, who placed the bull on Wall Street just before Christmas of 1989. Di Modica declared the sculpture a symbol of the "strength and power of the American people" following the stock market crash of 1987.

But like much "guerrilla art," Olek's work was not on display for long. She says the caretaker of the park tore it apart early in the morning.

Still, Olek remains optimistic about the future. "I really hope that I can do it again. This crocheted cover represents my best wishes to all of us. It will be a great, prosperous year with many wonderful surprises!"

Help Desk
Track testing tires to find the best
Find out how TireRack tests and reviews tires and why choosing the right ones for your car is so important. Play
Markets
Data as of 8:06pm ET
Data as of 2:44pm ET
Sponsored by
Sponsors
Sections