Amazon sold how many copies of Eclipse!? 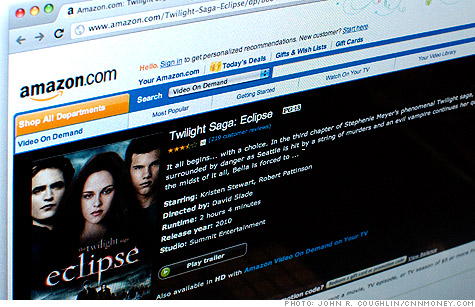 That's what Amazon implied in a press release it issued Monday, touting its holiday sales. But the eye-popping figure doesn't hold up.

"For the holiday time period alone, Amazon customers bought enough copies of Eclipse for Edward Cullen to watch the movie 1,000 times a day for all 109 years of his life," the company wrote.

When we called to fact-check, Amazon (AMZN, Fortune 500) backed off on its numbers.

'"The Amazon stat you inquired about this morning should've read 'year' not 'day,'" a company spokeswoman replied via e-mail.

Amazon's other quirky claims pan out. Here's the math on them ...

Working off 2000 census figures, we get these population numbers:

"Amazon customers purchased so many pairs of jeans that if you folded each pair and stacked them on top of each other, the height would be the equivalent of Mt. Everest."

This requires some guesstimating. What's the average height of a pair of folded jeans? Folded once or folded twice?

By happy coincidence, I have a pair of jeans under my desk. I folded it in half twice, the way one typically stores jeans, and measured at the midpoint. It's a touch shy of two inches.

"Amazon customers purchased enough Kyjen Hide-a-Squirrels to hide one toy squirrel everyday for the next 100 years."

This is like counting angels on the head of a pin. Hair-loss info site Keratin.com claims there's 7,000 - 15,000 hairs in an average beard; Godrej Shaving Cream's website claims the average is 30,000. No one is citing any sources.

And no matter how you do the math, Eclipse DVDs trumped all else.