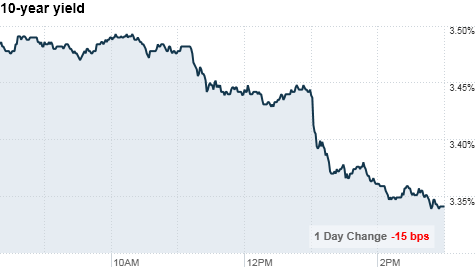 The $29 billion auction drew nearly three times that amount in bids, making for a strong sale a day after a separate auction of 5-year notes drew a weak response from investors.

Wednesday's auction results sent Treasury prices surging, and the yield on the benchmark 10-year note slipped to 3.56% from 3.48% late Tuesday. Prices and yields move in opposite directions.

Investors typically sell off Treasuries to cheapen them in anticipation of an auction. But the price on the 5-year notes were not at a low enough premium to attract sufficient interest, said Jim Vogel, head of agency debt research at FTN Financial.

I'm rebalancing my portfolio. What do I sell?