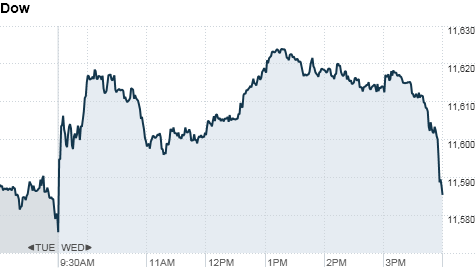 NEW YORK (CNNMoney.com) -- Stocks crept to yet another two-year record in quiet trading Wednesday, as traders look to end the year on a high note.

With no economic reports on the calendar, stocks eked out the slight gains as investors are eager to end the year on the upside.

"The market's going to drift higher for the remainder of the year, as we come into the beginning of January," said Rich Ilczyszyn, market strategist with futures broker Lind-Waldock.

Meanwhile, Ilczyszyn expects trading volume to remain muted for the rest of the week as the Northeast continues to recover from a severe snowstorm and many traders are off for the holidays.

Bank of America's (BAC, Fortune 500) stock fell 0.2% in afternoon trading, paring back losses from earlier in the morning. Allstate (ALL, Fortune 500) filed a lawsuit against the bank and its Countrywide Financial unit for more than $700 million in mortgage-backed securities that the insurance giant had purchased. The suit also named former Countrywide CEO Angelo Mozilo, who agreed to pay $67.5 million to settle fraud charges in October.

Economy: There were no major economic reports on Wednesday's agenda.

Oil for February delivery slipped 37 cents to settle at $91.12 a barrel, but was still near two-year highs as investors anticipate a boost in energy demand in 2011.

For hedge funds, nowhere to go but up