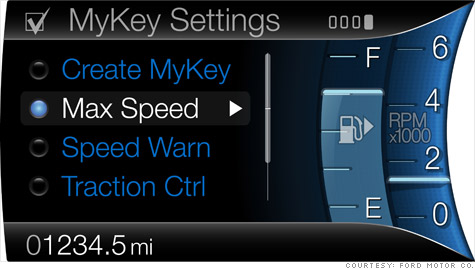 NEW YORK (CNNMoney.com) -- Those days of fast cars and rock n' roll could be coming to an end for teen drivers.

Ford has announced upgrades to its MyKey technology that will allow parents to control both speed settings and satellite radio programming in their family cars.

The new technology aims to tackle concerns about teen driving safety and assist parents in setting limits on younger drivers as they transition to highway driving.

Before the upgrade, Ford's MyKey system allowed users to program a key that limits a vehicle's speed to 80 mph and alerts the driver at 45, 55, and 65 mph. The new technology now allows parents to limit the vehicle's speeds to 65, 70, 75, or 80 mph -- curbing a teenager's options for driving too fast.

MyKey technology currently also gives parents the ability to mute the radio until passengers up front buckle up.

In a press release, Graydon Reitz, director of Ford Electrical and Electronic Systems Engineering, said: "Ford wants to give parents peace of mind that their kids are following practical household rules in the car."