Tax breaks may boost paychecks by $40 a week 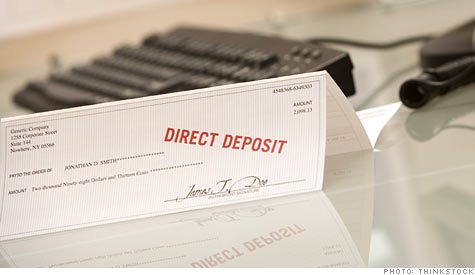 Stimulus effort could mean more money per paycheck for some but a few dollar less for others in 2011. By Steve Hargreaves, senior writerDecember 31, 2010: 7:58 AM ET

NEW YORK (CNNMoney) -- Your paycheck will either shrink by a few dollars or grow by nearly $40 per week in 2011, thanks to the tax compromise lawmakers passed earlier this month.

Slated to take effect in the first few weeks of 2011, a central component of the tax package included dropping the amount individuals paid in social security taxes from 6.2% to 4.2%.

This reduction, intended to stimulate the economy, takes the place an expiring tax break, known as Making Work Pay, that was passed as part of the stimulus effort in 2009.

For most tax filers -- 73 million to be exact -- it will mean more money in their weekly paycheck, according to numbers from the Tax Policy Center, a nonpartisan research group.

Workers only pay Social Security taxes on the first $106,800 in wages, so earnings above that will not be impacted.

But for low income earners and others, like some government employees, the benefits aren't as sweet. Since the Making Work Pay credit was $400 for an individual, one would have to earn at least $20,000 to match or exceed the payout from Making Work Pay.

About 51 million filers make less than $20,000 a year or are state or local government employees who have their own pension funds and don't pay into Social Security. They will see their paychecks shrink by an average of $4.04 less per week under the new system, according to the Tax Policy Center.

The remaining tax filers -- about 31 million -- will see no change at all, as most of them are retired and have no taxable wages.

The reduction in Social Security taxes will cost the government about $112 billion in 2011, similar to the two-year tab for Making Work Pay.

It's all part of the the $860 billion tax package that included extending the Bush tax cuts, which are across the board reductions in the income tax rate, tax cuts for businesses, and other tax breaks.

Lawmakers passed tax cuts despite concerns of a ballooning deficit because they felt higher taxes at this time would derail the fragile economic recovery.

"To the extent that you want a large stimulus to help the economy in 2011, this delivers twice the impact of Making Work Pay," Joe Rosenberg, a researcher at the Tax Policy Center, said of the Social Security tax reduction. "But this is all being borrowed, and sooner or later this fundamental gap will have to be addressed."