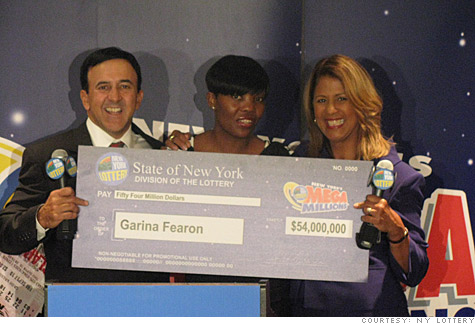 NEW YORK (CNNMoney) -- Gamblers lined up Tuesday at newsstands and gas stations in 41 states and Washington, D.C., hoping to overcome astronomical odds and win one of the largest jackpots in U.S. lottery history.

The winner of the $355 million Mega Millions jackpot can accept it two ways: as a $224 million lump sum or as 26 annual payments before taxes. Uncle Sam and state and local governments all get their piece, said Hapeman, adding that most winners go for the cash option.

The promise of sudden riches has put dollar signs in the eyes of lottery players.

"Help my family, give some to my church, enjoy my life," said Jose Guzman, a hotel worker from New Jersey and Mega Millions player, when asked what he would do with the jackpot.

The winner, or winners, will be announced Tuesday night -- assuming that there is a jackpot winner. There hasn't been one since Nov. 25, when a winning $25 million ticket -- as yet unclaimed -- was bought in Broadview Heights, Ohio, according to the Mega Millions website.

There have been several quarter-million winners, but no jackpot winner, allowing the jackpot to grow over time. It will continue to grow if no one strikes all six numbers on Tuesday.

The second-largest jackpot -- and the largest ever in the other big multi-state lottery, Powerball -- was $365 million won by ConAgra Foods co-workers in Nebraska on Feb. 18, 2006.

The most infamous case is that of Andrew "Jack" Whittaker, a construction company owner from West Virginia who won $315 million from Powerball in 2002.