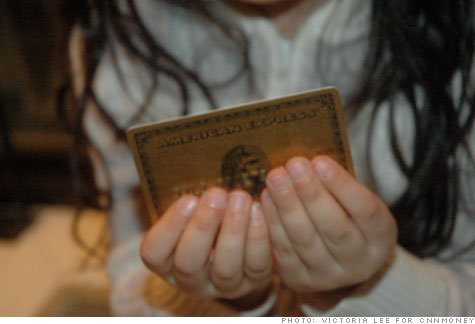 NEW YORK (CNNMoney) -- My daughter has a piggy bank and occasionally collects coins and adds them to her lot. Sometimes, she spills out the contents and enjoys putting each coin back in the bank through the slot at the top one at a time. But I wouldn't say she's good with money.

Aside from the shape and color, she can't differentiate between the pennies, nickels, dimes and quarters. She doesn't know how many pennies are in a dollar, or even what a quarter is worth. She's only three.

Still, the other day she received an application for an American Express card in the mail. My husband and I laughed at first, and then wondered what the consequences could be for a toddler with spending power.

Could we start building a credit history for her? Or better yet, could we spend massive amounts in her name and then have her declare bankruptcy, only to erase the debt by the time she is ready for college?

Before we got carried away, I thought a little bit more about the bank's offer. In order to qualify for a credit card, a person must be 18 years of age. But many parents cosign for their younger kids, often before they leave for college, or for "in case of emergency" circumstances.

Still, most issuers draw the line at authorized users under the age of at least 13.

When I contacted Amex, I was told that the offer we received "absolutely is a mistake."

"You can be an additional card holder on your parent's card only if you are 13 years or older," explained Marina Norville, a spokeswoman for the company.

Even the company's new prepaid card -- aimed at early financial education -- is only available to kids over 13. Parents are also on the hook for the bill and 100% responsible for covering all of the charges. (So much for the bankruptcy theory.)

With a bit of digging, Norville found out that my daughter was added to Amex's direct-mail list because either clothing or furniture had been sent to her directly over the last few years. Which is true.

Some of those retailers sold their lists to American Express, and Amex extended credit card offers to a portion of those people who were over 18. (For the record, the company said there was no age or birthdate associated with my daughter's name in their system.)

Of course, just because she received an offer, does not mean she would ultimately be approved for a card, but just that she was solicited at all is telling.

In the midst of the recession, issuers dramatically reeled in direct-mail offers to the lowest levels since 1993. Now they're back with a vengeance.

In the third quarter of last year, U.S. households received 1.2 billion credit card offers, a whopping 200% increase from the year before, according to Bill Hardekopf, credit card expert and CEO of Lowcards.com.

This year lenders will send out about 3.15 billion credit card offers, according to an estimate by market research firm Synovate. Such offers peaked at 6 billion in 2005.

"There are so many more offers now," Hardekopf said.

But there's a catch: "The people that they are going to, other than your 3-year-old, are the people with good or excellent credit." It seems that many banks are eager to extend credit once again, particularly to those consumers that seemingly offer less risk of default.

Despite being somewhat flattered, I guess, that our daughter was considered among that group, we threw the offer in the garbage. We decided that that she'd just have to wait a few years before she could charge her own Legos.