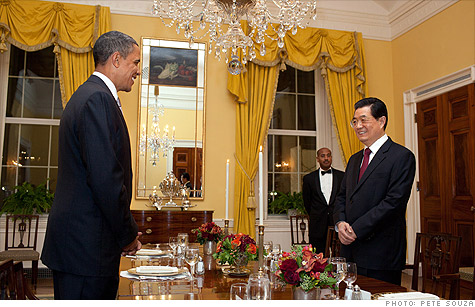 NEW YORK (CNNMoney) -- Chinese President Hu Jintao, in his White House visit Wednesday, met not only with President Obama but also with a group of heavy-hitting American business leaders.

Fourteen American executives attended a meeting hosted by the two leaders, and were joined by four of their Chinese counterparts.

It wasn't specified what was discussed behind closed doors, but exports and investment in the United States were believed to have been key topics. Before the meeting, the Obama administration announced $45 billion in new contracts that it said will increase U.S. exports to China and support an estimated 235,000 American jobs.

"What is needed, I believe, is a spirit of cooperation that is also friendly competition," Obama said at a news conference after the meeting.

But Obama also said the competition must be fair.

"I did also stress to President Hu that there has to be a level playing field for American companies competing in China," Obama said. "Trade has to be fair."

"What I've said to President Hu ... is not only will U.S. businesses be able to export more to China if we have a market-based currency, but it will also be good for China and President Hu's agenda of expanding domestic demand," Obama said about the dollar-yuan concerns.

For the CEOs who got a seat at the table, it was a rare chance to witness the high-pressure diplomacy of an official state visit.

American automakers were curiously absent from the invite list, even as they make a push to capture market share in China's booming auto industry.

The meeting comes as Obama's relationship with the business community appears to be thawing. For example, on Tuesday, Obama signed an executive order intended to "strike the right balance" between health, safety and environmental regulations and economic growth.