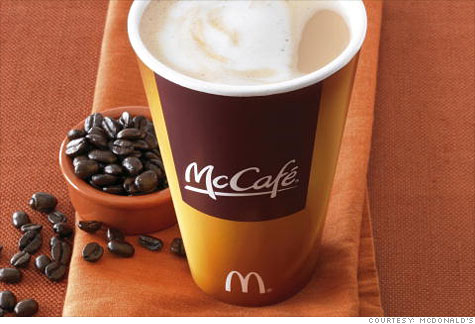 FORTUNE -- McDonald's has long been the darling of Wall Street, posting increases in same-store sales for 30 consecutive quarters since early 2003. Even during the depths of the recession in 2008, same-store sales rose by 6.1%.

Time and time again, the fast-food global chain has found success by being something to virtually everyone. It tweaked its menu beyond its core offerings of burgers and fries, grabbing all kinds of new customers, from the health conscious with its latest oatmeal breakfast to the cost conscious with its dollar menu items. And watch out Starbucks (SBUX, Fortune 500) -- McCafe's specialty coffee drinks now satisfy those who want more than just a standard cup of Joe.

Next Monday, when McDonald's (MCD, Fortune 500) announces its earnings for the last three months of 2010, analysts expect the chain's winning streak to continue. Wall Street expects the chain will end the fourth quarter at about $1.15 per share, up 12% from the same period a year ago.

Shareholders have reaped the benefits -- McDonald's stock has risen nearly 40% in the past three years. But how long will the run last? While Wall Street overwhelmingly maintains a 'buy' position on the stock, some analysts are beginning to point to factors that could start to work against the world's largest burger chain.

Here are three headwinds to watch for in 2011.

Rising food prices: Higher food commodity and energy prices have recently pushed up wholesale and retail food prices. The US Department of Agriculture predicts that prices will continue to accelerate during the first half of 2011, leading to a 2% to 3% rise in food price inflation for the year. McDonald's and other big burger chains have largely been unaffected so far, but that might soon change.

In a report last week, RBC Capital Markets analyst Larry Miller said McDonald's will raise prices by 2% to 3% to help offset its higher food costs. McDonald's declined to comment, citing a quiet period ahead of earnings next week. However, the chain's CFO Pete Bensen told analysts in October that while prices for beef and other ingredients were rising, the burger chain could deal with the increase.

But it may be too early to conclude that the Golden Arches will survive the inflationary pressures unscathed. Rising food prices could be a risk for McDonald's, says analyst Andy Barish of Jefferies and Company, even though the chain is largely safeguarded from such volatility because the vast majority of its operating profits, about two-thirds, come from franchises and royalties. While individual franchises might have a harder time dealing with rising prices given the sensitive demand of cost conscious consumers, it could eventually hurt profits of the overall chain if prices rise to levels where it makes it difficult for franchises to expand.

Limitation of beverages over burgers: McDonald's increasingly diverse menu has helped it become the nation's best-performing restaurant company during the economic slump. The chain realized quickly that consumers have lots of options when it comes to food and drink and they want the option to stop at McDonald's for snack time as opposed to just regular meals. Creative drinks are the product du jour at the chain, with everything from fruit smoothies and specialty coffee drinks.

But beverages might only take the company so far. The Wall Street Journal recently cited a company email that disclosed that McDonald's peak lunch-hour business has been flat for five years. And the few analysts taking a bearish view of McDonald's 2011 outlook say real growth of the company's core business -- the burgers and fries part -- is overstated.

Howard Penney, restaurant industry analyst with investment research firm Hedgeye and a Fortune contributor, believes the chain has expanded too broadly into beverages, and the plan will eventually catch up with the company -- helping send U.S. same store sales to negative levels during the second, third and fourth quarters this year. Much of McDonald's success in beverages has come from specialty coffees such as lattes, which are sold at relatively higher prices. Penney says year over year sales growth of the pricier beverages has flattened.

"McDonald's makes a lot of its money on fries and beverages," Penney says. "So selling beverages is good but it makes operations more complex. It takes more to make a latte than to pour a Coke. To continue peak service time you have to add labor."

Return on investment: Some franchises worry that their investments will not pay off, according to an October McDonald's franchisee survey by Janney Montgomery analyst Mark Kalinowski, who maintains a buy rating on the stock. A poll of franchisees shows some concern that corporate demands to redo stores and sell more coffee cost too much and might not pay off in the end.

One franchisee writes: "Very concerned about reinvestment issues and whether the Corporation is paying a fair share of McCafe, upgraded technology platforms ..." According to the Wall Street Journal, the McCafe machines cost $100,000 to install, with McDonald's covering just $30,000 of that.

The criticism might appear typical for any large corporation with a significant franchise business, but if the concerns by some franchise owners begin to snowball, McDonald's could face a problem that no amount of caffeine can fix.

Three signs consumers are inching back