Ambulance that may have carried JFK sells for $132,000 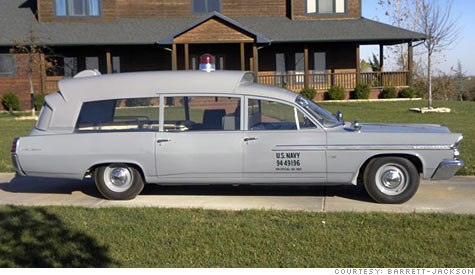 This ambulance supposedly carried the remains the President John F. Kennedy after his assissination, but bloggers call it a fake. By Peter Valdes-Dapena, senior writerJanuary 24, 2011: 10:12 AM ET
Follow Peter on Twitter: @PeterDrives

NEW YORK (CNNMoney) -- A 1963 Pontiac ambulance that supposedly carried the body of President John F. Kennedy after his assassination was sold at a Scottsdale, Ariz., auction Saturday night for $132,000.

The price would have probably been much higher except that the ambulance's authenticity had been cast into question before the sale, said McKeel Hagerty, president of collector car insurer Hagerty Insurance.

"If it were absolutely without a doubt, they probably would have paid several hundred thousand more to have it," he said.

Auction house Barrett-Jackson of Arizona said it was able to prove, to its complete satisfaction, that the vehicle actually was an authentic 1963 Bonneville ambulance that had been used by the Navy. But whether it had ever actually carried Kennedy's body may never be completely proven.

"Based on all research and our conversations with experts around the country, we do not believe there is a person alive who can answer this question with certainty," Barrett-Jackson said in a statement issued Friday, the day before the auction.

Barrett-Jackson said it had "fielded dozens of inquiries from around the country and reviewed countless documents submitted by interested parties" since announcing that it planned to sell the ambulance.

Details of the controversy surrounding the ambulance were reported Thursday by the automotive blog Jalopnik.com under the headline "The JFK ambulance is a fake."

In December, shortly after Barrett-Jackson announced it would sell the car, some antique ambulance buffs began posting on the website "Friends of the Professional Car Society" noting that the Kennedy ambulance had supposedly been destroyed in the 1980s at the request of the Kennedy family. "Professional car" is a term for passenger car-based ambulances, hearses, livery cars and the like.

Some experts even provided documentation, including photographs of the ambulance being flattened in a crushing machine, according to Jalopnik.com.

Barrett-Jackson also showed one of the photographs in a presentation just before the auction. The image showed a car just like the one auctioned being flattened in the jaws of crushing machine.

Barrett-Jackson even admits that the smashed ambulance, and not the one sold at auction, may have actually carried the president's remains.

"For example, there are credible reports that indicate there were two 1963 Pontiac Bonneville ambulances involved in the events of the night of Nov. 23, 1963," Barrett-Jackson said in its statement, "with one actually carrying President Kennedy's casket and family members and the other acting as a diversion."

Barrett-Jackson cited letters and other documentary evidence provided by the ambulance's owner as providing sufficient evidence that it could, in fact, have been the ambulance that carried the president's dead body away from Andrews Air Force Base in 1963.

Ray Wert, the editor of Jalopnik.com, said his site stands by the assertion that the ambulance is not what its owner purported it to be, but that he could still understand someone bidding for it.

"If you're a speculator, I can see going for it just in case," he said.