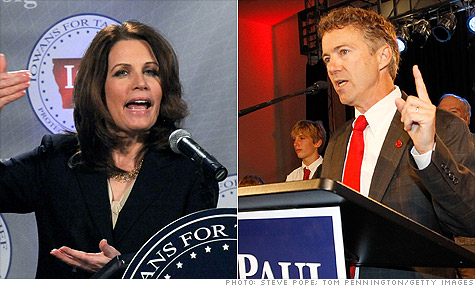 NEW YORK (CNNMoney) -- The Tea Party campaigned on scaling back the size of government, and now we know how they want to do it.

The numbers in their proposals are staggering. Paul wants to slash $500 billion in fiscal year 2011, which only has eight remaining months. Bachmann lists more than $400 billion in cuts.

The proposals are not likely to go very far as legislation. But at a time when lawmakers on both sides of the aisle acknowledge the need for fiscal restraint, the Paul and Bachman proposals clearly stake out one extreme.

Analysis: Obama and the national debt

Their cuts would force fundamental change in the way Washington conducts business.

"Oh my god. That's just crazy," said Isabel Sawhill, an economist who studies fiscal issues at the Brookings Institution. "Really that is wacko."

While the numbers are eye-popping, Paul's proposal is limited mostly to non-defense "discretionary" spending, which is less than 20% of the total budget.

Paul does not propose significant changes to the other 80% -- the funding for defense, Medicare, Medicaid and Social Security -- where much of the growing debt problem is rooted.

Paul does want to cut military spending by $48 billion, but that's a small slice of the Pentagon budget.

Bachmann would replace farm subsidies with farmer savings accounts, eliminate or dramatically scale back the Department of Education (save $29 billion or $31 billion) and slash programs at the Department of Justice ($7.8 billion).

Paul Ryan: 'We must act now'

Billed as a list of "potential" cuts, it remains unclear whether Bachmann plans to introduce legislation based on the list.

The Tea Party proposals come at a time when Washington has budget on the brain. President Obama is calling for a five-year spending freeze in non-security discretionary spending during the State of the Union address.

And on Tuesday, the new House Republican majority approved a resolution pledging to cut non security federal spending to "2008 levels or less." GOP aides say that could mean about $60 billion in savings.

Last week, the conservative House Republican Study Committee proposed a bill that would shave $2.5 trillion off of spending over the next decade.

"Conservatives have a free ride right now because they can propose these things and know they are not going to go anywhere," Sawhill said, adding that Obama wields the veto pen.