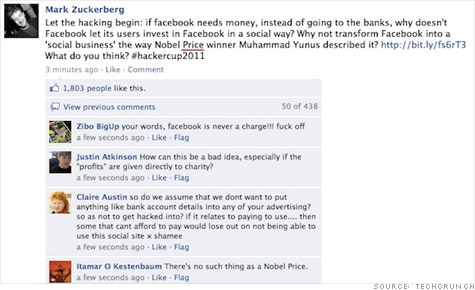 NEW YORK (CNNMoney) -- Facebook founder Mark Zuckerberg's fan page was hacked Tuesday -- a high-profile breach on a site that constantly faces scrutiny about its handling of its members private data.

The message that appeared on Zuckerberg's page under his name read: "Let the hacking begin: If facebook needs money, instead of going to the banks, why doesn't Facebook let its users invest in Facebook in a social way? Why not transform Facebook into a 'social business' the way Nobel Price winner Muhammad Yunus described it? http://bit.ly/fs6rT3 What do you think? #hackercup2011"

The message received a flurry of more than 1,800 "likes" before it was removed from the page. Facebook's representatives have not returned calls seeking comment.

Zuckerberg wasn't the only famous figure to have his Facebook page hacked this week. A hacker posted a message on French President Nicolas Sarkozy's wall on Sunday that stated the president would not run for re-election.

Sarkozy responded with a post saying no "qu'aucun système n'est infaillible" -- which translates to 'no system is infallible.'

While Facebook staying silent on the hack, the company posted a blog entry Wednesday morning titled: "A Continued Commitment to Security." It draws attention to Data Privacy Data, which takes place this Friday. The day is an international effort by governments and businesses to draw attention to personal-data protection issues.

"A key part of controlling information has always been protecting it from security threats like viruses, malware and hackers. That's why we've developed a number of complex systems that operate behind the scenes to keep you secure on Facebook," the post read.

The unsettling breaches raise questions about the company's security.

"Mark Zuckerberg might be wanting to take a close look at his privacy and security settings after this embarrassing breach," Graham Cluley, senior technology consultant at Sophos, wrote on the security protection site.

"It's not clear if he was careless with his password, was phished, or sat down in a Starbucks and got sidejacked while using an unencrypted wireless network," Cluley said. "However it happened, it's left egg on his face just when Facebook wants to reassure users that it takes security and privacy seriously."

Hemanshu Nigam Founder of security consulting company SSP Blue says the breach was probably due to phishing rather than a complicated hack.

"Hacking is when you're actually breaking the code -- you have to hack into Facebook's system," he said.

"You don't need to engage in that sort of technical attack. It's easier to exploit in through phishing," he said "It's also easy as a user of Facebook to be on guard and not click on a link you don't think your friend would send."