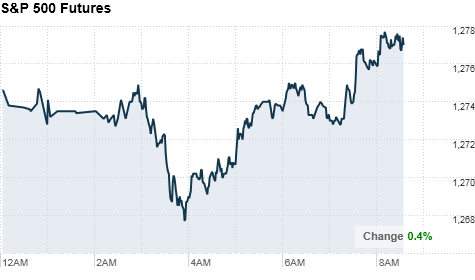 On Friday, stocks logged their biggest drop in months, as mounting political protests and tensions across Egypt sparked caution among investors -- sending the CBOE volatility index (VIX), known as the VIX and used to gauge fear in the market, more than 24% higher.

The Dow Jones industrial average lost 166 points, marking a sharp retreat for the index after it flirted with the 12,000 barrier earlier in the week.

Protests in Egypt continued over the weekend, leading Moody's Investors Service to downgrade its rating on the nation's debt to "negative" from "stable".

But Tom Winmill, portfolio manager at Midas Funds, said the worst may be over when it comes to the impact of Egypt's unrest on U.S. markets.

"While there's still a lot of uncertainty regarding the outcome of the Egypt political crisis, this might be the end of the scare," he said. "It looks like a very good buying opportunity, because once the situation is resolved I think markets will resume their upward trend."

But Egypt won't be the last country to fuel worries about political and economic situations abroad, said Winmill.

"I think we'll see a lot more civil unrest as economic situations become intolerable to the general populations," he said. "By the end of the week, I think there will be a resolution and happiness will reign supreme in the markets. But let's be prepared for the next one, because there will certainly be another crisis in another developing country."

European stocks hovered around breakeven during mid-morning trade. Britain's FTSE 100 and the DAX in Germany were flat, and France's CAC 40 rose 0.3%.

Analysts surveyed by Thomson Reuters had expected earnings per share of $1.63. Revenue climbed 17% to $105.2 billion, beating forecasts for sales of $99.1 billion.

Over the weekend, Massey Energy (MEE) was acquired by rival Alpha Natural Resources in a $7.1 billion deal. Shares of Massey jumped 13% in pre-market trading Monday.

Economists expected personal income to rise 0.5% in December, according to a consensus survey from Briefing.com. Personal spending was forecast to rise 0.6%.

After the opening bell, a closely watched report on manufacturing activity in the Chicago area will be released. Analysts expect growth to slow slightly. The index is forecast to slip to a reading of 65, from 66.8 in the previous month.

"If we get positive news there, the market could react strongly if it shows that the stimulus is working and there has been a further recovery in the U.S. economy," Winmill said.