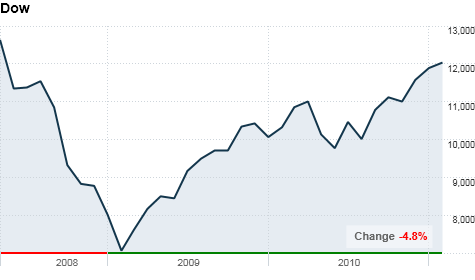 NEW YORK (CNNMoney) -- U.S. stocks started February with a bang Tuesday, with the Dow and S&P 500 closing above key psychological levels for the first time in more than two years, and the Nasdaq gaining almost 2%.

Investors overcame ongoing jitters over protests in Egypt and new developments in Jordan, where the king dismissed his government and appointed a new prime minister.

All but three of the 30 blue-chip components moved higher. A 5.5% jump in shares of Pfizer (PFE, Fortune 500) led the advance, with the drugmaker posting better-than-expected fourth-quarter earnings. Alcoa (AA, Fortune 500) and Bank of America (BAC, Fortune 500) were also big Dow gainers.

Much stronger-than-expected manufacturing data added fuel to the buying spree.

"Economic data remains fairly positive and quarterly earnings are coming out strong across the board," said Rob Lutts, chief investment officer at Cabot Money Management. "Those are having a big impact and driving expectations higher."

Economy: Construction spending dropped 2.5% in December, following a rise of 0.4% in November. Economists were expecting spending to ease 0.4% during the month.

In Washington, the Senate Budget Committee kicked off three days of hearings on the economic outlook, tax reform and challenges to the economic recovery.

Jobs back but pay stinks

At the end of the week, the government releases its January jobs report, and investors will be eyeing the report closely for signs of improvement in the labor market.

Companies: Before the opening bell, United Parcel Service (UPS, Fortune 500) logged a 44% jump in profit that beat forecasts and said it expects earnings per share to climb to a record high for 2011. Shares of the package delivery company finished up 4.2%.

Shares of Borders (BGP) plunged more than 35% in the final minutes of trading following a Bloomberg report that the bookseller may file for bankruptcy protection as early as next week. The report, which cited people familiar with the matter, also said several private equity firms are considering whether to provide a junior loan to the company, which will likely close at least 150 stores.

But some investors think the fears that sparked a sell-off in the stock market late last week may have been overblown and the situation is beginning to stabilize.

"Investors are realizing that while there are still issues in Egypt and across the Middle East, they will likely be resolved," Lutts said. "For now, we're gravitating back to the reality that the U.S. economy is recovering."

Currencies and commodities: The dollar slumped against the euro, the Japanese yen and the British pound.

Oil threat in Egypt may be overblown

Oil for March delivery slipped $1.42 cents to settle at $90.77 a barrel. On Monday, crude prices jumped to their highest level since October 2008, gaining 2.9% to settle at $92.19 a barrel, amid worries about potential disruptions to shipments through the Egypt-controlled Suez Canal.

Egypt: The next Iran?