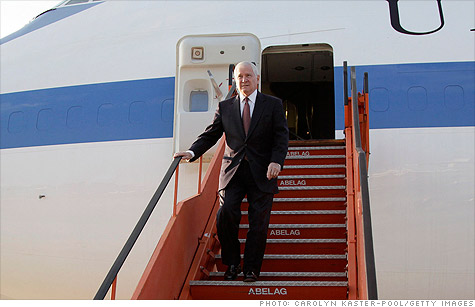 Defense Secretary Robert Gates is warning that if Congress passes another stop-gap spending bill, instead of a full budget, the military will suffer. By Charles Riley, staff reporterFebruary 2, 2011: 5:28 AM ET

For the past four months, government agencies have been operating at last year's funding levels because Congress has failed to approve a budget for the new fiscal year.

Now two agencies central to regulating the financial markets -- the Securities and Exchange Commission and the Commodity Futures Trading Commission -- are warning they will have trouble enforcing the new Dodd-Frank Wall Street reform law.

"I have a crisis on my doorstep," Gates told reporters last week.

Without additional funding, operations and maintenance will suffer, Gates said. Training for troops will be reduced, overall military readiness will be hurt and pilots will get less flight time.

It's not unusual for agencies to argue that budget cuts will harm their ability to do their jobs. Still, the current uncertainty over funding is raising alarms.

Gates blames Congress. Instead of passing a budget, lawmakers have approved a series of four temporary extensions -- so called continuing resolutions -- that mostly freeze funding at last year's levels.

While that keeps the government open for business, it frustrates agencies trying to plan for the year ahead, and in many cases, leaves officials charged with implementing new laws without funding to do so.

"In an ideal world, agencies would know how much they had to spend with some lead time so they could plan and do the necessary trade-offs," said Rudolph Penner, a former Congressional Budget Office director who is now a public policy scholar at at the Urban Institute.

The latest stop-gap measure is set to expire March 4, and the prospect of yet another quick fix has agency heads warning of dire consequences.

Of course, right now the agencies are complaining about being stuck with last year's money. But if Republicans manage to deliver on their promises of cuts in the 2011 budget, officials might have bigger problems on their hands.

Spending crunch: Where our money is going

As it is now, Gates is arguing that being held at last year's spending represents a $23 billion annual cut in the defense budget.

Agency leaders also bristle at the constrictive nature of a continuing resolution, which makes it hard for them to shuffle money around to minimize harm.

"They can't jumble funds around willy-nilly," said Penner. "For most items they have to get the permission of the [congressional] appropriations committee."

Financial reform on the line: Across the Potomac, the SEC has delayed key parts of the financial reform bill passed last year by Congress -- and is curtailing some of its normal operations.

The agency has delayed the creation of five key initiatives mandated by the Dodd-Frank Wall Street reform law, including a new office of women and minority inclusion and a whistle blower unit.

The SEC has also been forced to postpone depositions in some enforcement cases and has capped the number of expert witnesses it hires.

The situation is much the same at the CFTC, the agency tasked with regulating derivatives like oil contracts.

Democrat Bart Chilton, one of five commissioners, said in a speech last week that another continuing resolution represents a "clear and present danger," and warned that "without additional resources, we could be right back where we were when the economy tanked."

The CFTC is a key player in the implementation of Dodd-Frank, but needs money to carry out its mission -- which includes ramping up regulation of the murky, multi-trillion dollar derivatives market.

"Congress gave regulators the responsibility to implement the law, but guess what?" Chilton said. "There may not be funds to do the job, to have the people power and the computer capability ... to actually institute the changes Congress itself sought."

Without additional funding, Chilton said in an interview, the agency might be forced to charge investors a user fee every time they make a trade.

But even that would require permission from Congress, leaving the CFTC in a very tough spot, even without another key factor: politics.

It's no secret that some Republicans on Capitol Hill oppose Dodd-Frank, and might view passing another continuing resolution as a way to starve the agency.

"It's difficult to decide whether [passing another continuing resolution] is incompetence, or a sneaky strategic plan," Chilton said. "Some of those folks look at us not having resources as a way out of provisions of the law."

Chilton and Gates won't have to wait long to find out if extra funding is on the way. Rep. Eric Cantor, the Republican House Majority Leader, announced last week that he is scheduling a vote on the next continuing resolution for the week of Feb. 14.