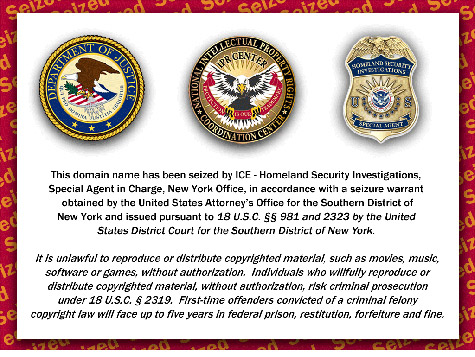 Visitors to the seized websites are greeted by this notice, courtesy of the federal government. By Charles Riley, staff reporterFebruary 2, 2011: 3:40 PM ET

NEW YORK (CNNMoney) -- Ten websites that were allegedly engaged in the live streaming of major sporting events have been seized and shut down by authorities, the government said Wednesday.

The 10 sites were among the most popular on the Internet for users hoping to access copyrighted sporting events, the U.S. Attorney's Office said.

According to the government's complaint, which was unsealed Wednesday, each of the seized sites aggregated illegal, pirated broadcasts, and provided links to site visitors.

"The illegal streaming of professional sporting events over the Internet deals a financial body blow to the leagues and broadcasters who are forced to pass their losses off to fans by raising prices for tickets and pay-per-view events," Bharara said.

The sites were disabled Tuesday, and have since been replaced by a posting notifying visitors that "This domain has been seized by ICE - Homeland Security Investigations."

The seizure were carried out by the United States Attorney for the Southern District of New York and U.S. Immigration and Customs Enforcement, or ICE.

Want a better TV for the Super Bowl? Buy now!